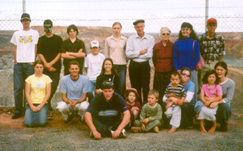 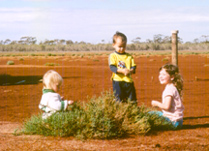 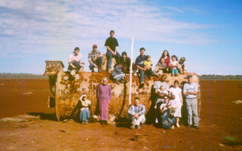 On Friday morning we (Damien, Johnny and Catherine) arrived early at Ben's house. After some rather humorous packing ventures and after Naomi very sadly put away her blow-up boat due to no room in the car, we had a later than expected start to Rowles Lagoon near Kalgoorlie for a weekend camp-out, a 6 1/2; hour drive from Perth.

After a very long trip we arrived safely. We set up camp and lit the fires just in time for Sabbath opening. After worship and some conversation, myself (Damien T), Benjamin T, Damien G, and Johnny T, all decided to sleep under the stars. In the middle of the night Debborah and Jo arrived and I got up and incoherently guided them to their lodging, hoping that it was the right one. I then went back to bed and realised it had been raining and everything was now wet. Ben proceeded to find the tarpaulin to cover us after which we slept soundly until morning.

On Sabbath morning we began the day with getting up at sunrise because we couldn't stand the light in our eyes.

Before Sabbath School started, locals from Kalgoorlie arrived – Sr Lyn Dymond, her husband and two sons. For most of us it was the first time we had met them and it was a blessing to have them there and fellowship with them. We were also grateful to them being in Kalgoorlie as we may have never thought of having a camp-out there if they had not moved there.

We had breakfast and the young children were looked after by Johnny, Naomi and Taisha during Sabbath School. They were told stories about Daniel and the Lion&#8217;s Den and other Bible stories. After that we had Divine Service where we considered the topic, "What is of Value to You?"

After Service we had lunch and then went for a walk around the Lagoon. After that we sat around talking until tea time.

Sunday morning we had worship and after all of us got organised we took off for an excursion to Kalgoorlie to visit the Mining Hall of Fame and have a guided tour through some underground mine sites. It was a bit scary going down in a packed excuse for an elevator to over three stories underground with formidable dark passages the only route for walking. The guide had a good sense of humour and gave us an interesting rundown of life underground and the kind of conditions the miners were subjected to. We were all glad to see the sun and sky once the tour was over.

fter touring the Miners Hall of Fame and watching a "gold pour" we all had lunch in the park and then went to watch a much anticipated blast at the super pit mine. We were waiting for a while as the blast did not come when expected, but when it was least expected, the earth shook as tonnes of dust and rocks torpedoed out of the mine wall. It was very spectacular!

We then separated into groups to complete some letterboxing of the town of Kalgoorlie. We praise the Lord we received three requests for the Great Controversy as a result of the hour spent in putting the free book offers in the letterboxes. After that some of us went for much needed showers in the caravan park while others continued on back to camp.

After worship, tea and some socialising some of us (Catherine, Shelley and Taisha) attempted to sleep in the hammocks under the stars. It worked for a little while until it started to rain and then one by one we all migrated back to the tents to try and get some sleep until morning.

Monday morning began with worship on the subject of Ghost Towns and how we can be spiritual ghost towns. People who have once been flourishing Christians, but who have become desolate due to the harsh surroundings, greed for gain and such like. After worship all was packed up and we went for a walk on the lagoon (which incidentally held no water due to the lack of rain) up to an old and deserted train engine. The more energetic of us climbed up onto the engine for a group photo while the rest gathered around it. We visited some ghost towns on the way back from camp and then travelled back to Perth.

We learned at the Miners Hall of Fame that some of the people in their mad greed for gold had died of exposure, want, hunger, many of them with gold in their pockets. What they had judged as the most important to them had, in the getting of it, caused their death. It can be like that with our souls. The world with all it allurements may seem like everything to us, but while getting its treasures we pass by the most important things, those of eternal value, and die a spiritual death. It brought home the words of the Bible which say, "What doth it profit a man if he shall gain the whole world and yet lose his soul. And what can a man give in exchange for his soul?"