It is with much sadness in our hearts that we say goodbye to our dearly beloved Brother Neville Stuart Brittain who fell asleep in Jesus on Friday morning 28th March 2014 at the age of 85.

Born in Victoria, Australia, Bro. Brittain came to the Seventh Day Adventist Reform Movement in his youth. As a young man he attended the Missionary College at Hebron. Bro Brittain married Elizabeth Southwell on 12th April 1953. He was also trained as a naturopath and served extensively in medical missionary work with the Elim Health Centre. He was later employed by Hopewood Health Retreat, in Wallacia, NSW, and also served as President of the forerunner to the Australian Natural Therapists Association (ANTA). He was quite knowledgeable in many subjects, yet he had a certain grace and humility characteristic of true Christian faith.

Bro. Brittain was a man of integrity and principle with a great love for the present truth. In 1975 he received a call to engage in full-time gospel ministry in Western Australia. While there he helped build the first church residence at Stoneville. Two years later he was ordained as a minister and together with his family moved to South Africa where he served as the African Regional Secretary for 12 years. He also served as Regional Secretary for Asia and the Pacific.

In 1991 Bro. Brittain was elected as the President of the General Conference of the Seventh Day Adventist Reform Movement, a position he held until 1995. He then served as GC Vice President before retiring and returning to Australia. During his retirement years he was still quite active, cheerfully assisting when needed. A particular love of sharing his knowledge led him to help with the Elim Missionary College in delivering the medical missionary unit, “Health and the Gospel.” He also served on the board of the College in 2001- 2002. Even now his work carries on at EMC through recorded lectures he gave in prior years.

During the last 10 years of his life Br Brittain, his wife Elizabeth, and their son Keith, resided at the Elim Heights Youth Camp as the resident Caretakers. The work that the Brittains put into the property was greatly appreciated by all who utilised the grounds during their tenure.

It was with deep sadness that the news was received almost a year ago that Bro. Brittain had been diagnosed with stomach cancer, after just having celebrated his sixtieth wedding anniversary. Having lived a long and fulfilling life, he was content to let the illness take its course. Many have testified of the Christian dignity and peace with which Bro. Brittain faced death.

On Friday, April 4, 2014, a memorial service took place at Schofields Church Hall, in NSW, Australia. Many family members, friends and church family attended the service. Br Peter Lausevic shared an encouraging message, “Christ Our Only Hope”– specially prepared at the request of Br Brittain. His brother-in-law, Gordon Southwell, shared the eulogy, highlighting the many events of a life well lived in faithful service to the Lord. Bro Brittain’s children and grandchildren also shared their cherished family memories. Br Sureshkumar, representing the General Conference, briefly shared some words of encouragement and comfort for all in attendance. In appreciation of Bro. Brittain’s love of music, the NSW Combined Choir shared two beautiful songs to the glory of God. The burial service taken by Br. A. C. Sas was held soon afterwards at Pine Grove Memorial Park, Eastern Creek (Minchinbury), NSW. 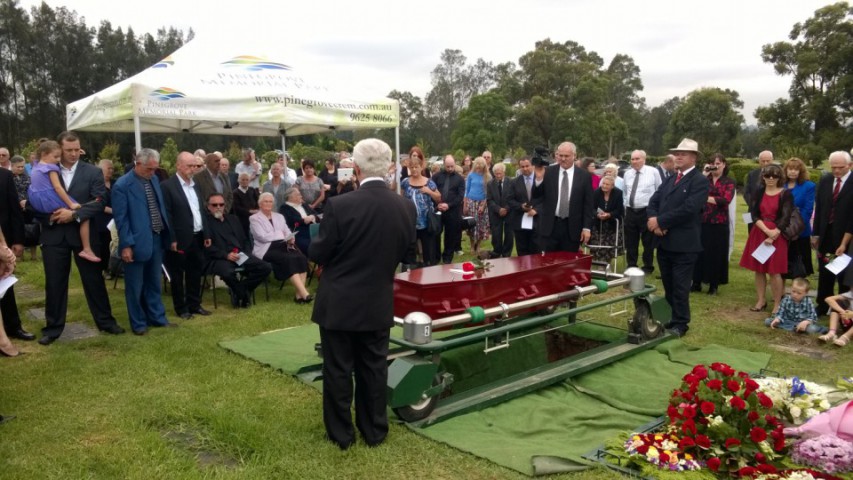 Many souls were greatly blessed by the faithful courage of this man of God and were tremendously benefitted by his honest, practical ministry. He will be greatly missed by all.

Bro Brittain is survived by his wife, Elizabeth, their six children and their spouses, twelve grandchildren and twelve great-grandchildren.  We are grateful to God for the life of this dear man, and we share the hope that if faithful, we will once again meet our dear brother on the special resurrection morn. Truly it may said of him: “Blessed are the dead which die in the Lord from henceforth: Yea, saith the Spirit, that they may rest from their labours; and their works do follow them.” (Revelation 14:12)