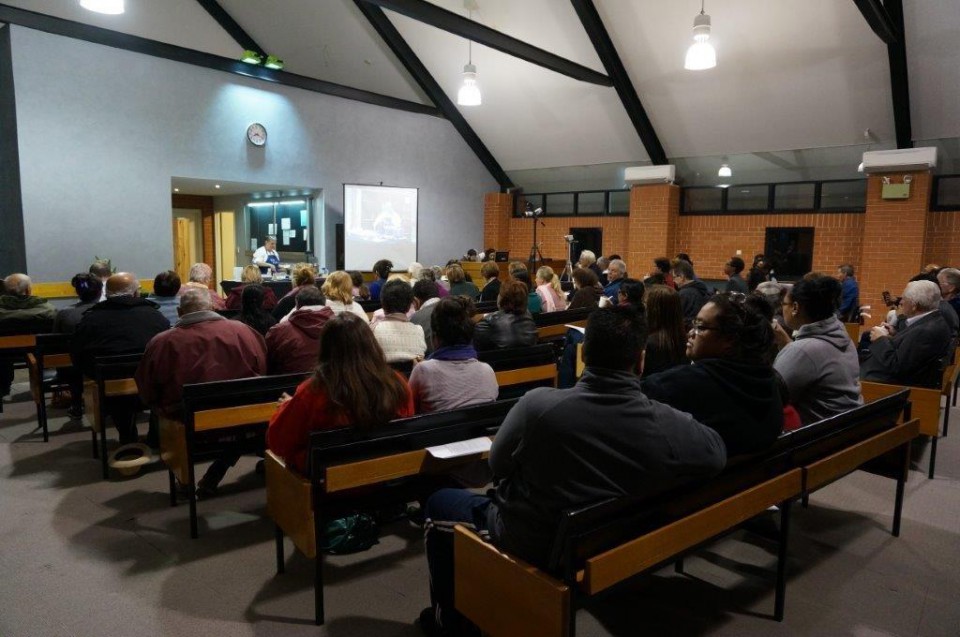 “The Vegetarian Way” health outreach is a program run by the Seventh Day Adventist Reform Movement.

During the first three Monday evenings of May 2014, the Schofields Church ran this program catering for the local community.  These health lectures and cooking demonstrations were geared to educate and encourage the community to pursue a healthier lifestyle and also to bring an awareness that true happiness only comes from our wonderful, loving God.

For the first night an eager audience of 74 people gathered, followed by increasing numbers as it progressed.  Many known faces returned from previous sessions, and many newcomers.

The evenings were divided in two sections.  The first section comprised a health lecture given by our Naturopaths, Amos Thiel and Alasdair Pow; and the second was the practical food preparation demonstration presented by Lidia Voncina, Rosetta Ilic, Amy Gules, Stela Gules, Vivian Ilic and Alyssia Thiel.

The first lecture taken by Amos was about “The Fat Family”.  He spoke about good and bad fats and the importance of the Omegas 3 and 6 in our diet.  In the second week Amos spoke about the importance of having “whole” foods.  The last health segment for this series was taken by Alasdair, and he spoke about being slim without dieting!  He stressed the importance of having a plant-based diet which is very high in fibre.  A practical demonstration was given comparing the amount of kilojoules found in one take-a-way meal (a double quarter pounder meal with McFlurry and Coke) and trays of raw food.  It was surprising to hear that for a healthy recommended diet the daily kilojoules intake should be around 8,700 kilojoules per day.   The double quarter pounder meal demonstrated had 9,816 kilojoules which was more than the daily recommendation, and that can be easily eaten in one meal.  We would never be able to eat so much raw food as that in one sitting, and yet we don’t have a problem eating the take-a-way meal.  This is why we put on weight without realising it.  The meal demonstrated would be the equivalent of eating: 2kgs tomatoes, 1kg mandarins, 2kgs cucumbers, 1kg apples, 1kg green capsicums, 3 bananas, and 1 lettuce.  All the fresh produce demonstrated together equalled to 9,498 kilojoules which is 200kj less than the meal.  Some food for thought!

The second part of each week’s workshop was the food preparation demonstration.  For the first week it was decided to let “millet” shine!  Some of the benefits of using millet in the diet are:

Proteins, and more importantly complete proteins, are needed for growth, development and manufacture of hormones, antibodies and tissues.  It is also needed for the development of bones, muscles, skin, cartilage and blood.  Hair and nails are also made up of proteins.  Lack of proteins in the diet can cause serious problems for the smooth functioning of the body.

The dishes demonstrated during these sessions were:

Cooking demonstrations very much involve team work.  Behind the scenes were some very awesome busy people who we could not do without: from the full-time washing-up job to cooking and dishing out of samples, setting up of the hall, recordings, web uploads, book sales and health food sales to the cleaning up at the end of the day.  A huge thank you to all those who tirelessly worked so hard in making this outreach such a success.

For those who are interested, these health lectures and cooking demonstrations can be viewed on YouTube by searching for Schofields Church: http://www.youtube.com/watch?v=2LzaeuNWxBw and selecting The Vegetarian Way–Cooking Demo 1, 2, 3