Our condolences go to the family and friends of late Valma Alice Rendell who died from a severe heart attack on Friday 8th August 2014 at the wonderful age of 93.  We look forward to the time when we will see Sr Rendell once again at the beautiful home prepared for the faithful. “But as it is written, Eye hath not seen, nor ear heard, neither have entered into the heart of man, the things which God hath prepared for them that love him.”  I Corinthians 2:9. 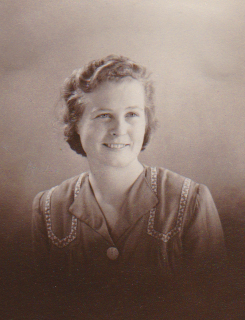 EULOGY written by her family:

Valma Alice McMahon was born in Drouin, Victoria on 19 July, 1921 to Robert and Dorothy.

Valma was the second child and ended up having eleven siblings – making a family of twelve children – nine girls and three boys.

During her young life, there was a lot of sharing.  One afternoon when family and cousins were out, leaving her on her own, her mother and aunt heard her say, “I’ve got a teddy, all to myself – I’ve got a doll, all to myself.”

When Valma was 8 years old her parents sent the two sisters, Doreen and Valma to Tasmania for a year of schooling.  Her aunty had a little church school in Collinsville.  In the hills south of Hobart, she lived and learnt many principles that stayed with her for life.  Years later, she was able to visit Tasmania and sit in the pew of the little church where she had been taught.

As a nine year old returning home, she loved the outdoors and liked nothing better than to pick peas with her mother instead of looking after the babies in the house.

High school was completed in Sale, Victoria, where she and Doreen boarded during the week and rode home on their bicycles for Sabbath.  As the family moved a lot, sometimes it was a long ride, up to 70 miles (112km) – she and her sister got very sunburnt in the process.

After she finished school, she took jobs teaching schools in different localities in Victoria as well as Tasmania. Whilst in Tasmania, her parents learnt of the SDA Reform Movement Church, and her mother came to Tasmania to collect her.  This was a big sacrifice for a mother who had to leave behind a tiny baby; namely, Eunice.

Valma was reluctant to leave as she had done the next day’s program on the blackboard all illustrated beautifully with drawings (one of her greatest pleasures.)  Nevertheless, she returned to Victoria school-teaching and finally an office job in Sydney with the infant church.

Valma worked alongside Br D. Nicolici. She also lived with the Nicolici family for a time. Brother Nicolici and his wife had moved from Romania to Australia a short time before, to bring the SDA Reform Message to this young country.  With his zeal and inspiration, many souls were to learn God’s true stand for His people in time of war.  Valma also learnt that a Christian should dress modestly, yet not extravagantly.  One day, Valma went shopping in her lunch hour for a new hat, but returning to the office, and on showing her new purchase, Br Nicolici commented that the accessories on the hat were too showy and not in keeping with their faith.  Valma consequently returned to the shop and swapped the hat.

She remained at that job for five years, during which time she learnt typewriting at college and performed many office duties including reports, auditing and writing.  Her writing skills were also stretched to transcribing Br Nicolici’s broken English.  I will add that Valma continued to enjoy her role as a literature proof-reader until late last year.

(Footnote:  Soon after this, a number of Valma’s sisters moved to Sydney to work in the church health clinic & church farm/missionary school – other missionary enterprises set up under the direction of Br Nicolici.  Many youth were trained in the use of natural treatments, hydrotherapy and massage as well as many ministers and workers—Brothers McDonald, Smith, Brittain, Weymark – for future positions of responsibility, some in the General Conference.)

During this time, she met a young man from Victoria.  They became very friendly and in April, 1947, she married Stanley Rendell.  After their marriage, they shifted to Melbourne where their first daughter, Dorothy was born.  Later they moved to New South Wales to work for Jack Wiseman at Lower Portland, and their second daughter, Valda, was born in Windsor. 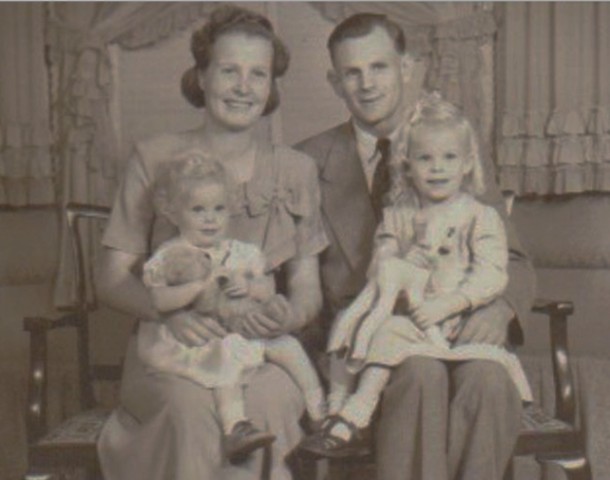 When Valda was two years old, Stan was called into the church work and was then transferred to Brisbane where the children grew up, making many lifelong friends, especially with the Barnetts and the Patricks.

Valma helped her husband in his work.  Household jobs were sometimes neglected to fit in the necessary things such as train trips to the city.  The girls can remember getting on the wrong train and having to go back to the city and start again when Valma would say, “Don’t tell Dad.”

In 1962, Stan was transferred to New Zealand for two years and then to Melbourne and finally back to Queensland for the final years of his working life.

Whilst back in Queensland, Valma had discovered a new hobby – growing African violets.  She had a lovely collection and started new plants from a single leaf.  For one of the girl’s weddings, Valma had an African violet at the end of each pew.

During this time, Stan’s health declined.  Stan took an early retirement and soon after, Stan and Valma relocated to New South Wales to be close to their daughters.  In doing so, they purchased their first home in Junee.

Valma faithfully cared for Stan during those difficult years, driving him everywhere.  She also kept a lovely garden in the backyard.

After Stan died in August 1990, Valma enjoyed visiting friends and family, even going to Western Australia to visit her sister and family.  During one trip in New South Wales, Valma was involved in a dreadful car accident and was transferred to the Canberra hospital where she remained for several weeks.  Gradually her health returned and she was able to move back to her home in Junee.

Her neighbours and friends in Junee helped Valma a lot. Her next door neighbour Maisie, would take Valma to the doctor, bank or supermarket as requested. Valma only recently mentioned she considered Maisie to be her best friend.

At the local flour mill, she was known as Mrs Spelt Flour.  As the flour mill was discontinuing to sell to the public, Mrs Spelt flour would arrive with a container and they would obligingly fill it for her.  With the flour, Valma faithfully made her own bread, first by hand and then was introduced to the wonderful bread-making machine.  One of Friday’s special jobs was to “make the bread.”

In June, 2013, Valma had a fall and the doctors suspected a heart condition, which after two tests proved to be correct.  She was advised not to drive again – a big thing as Valma was always very proud of her driving.

A lot of changes happened during that last twelve months.  No longer able to drive to church, she appreciated family who especially came around to pick her up. Gradually changes took place.  She sold her car to her daughter Valda and kept a watchful eye on what happened to it.  One day when Valda was driving her home from church, Valma said, “My car doesn’t like driving on dirt roads,” to which Valda replied, “Your car has a new mother now, and it has to do what she says.”

Valma filled her life with reading and writing in her diary – the last entry being two days before she died.

After another bad fall in December 2013, she was no longer able to live alone.  In January 2014, she moved to Coleambally to be with her daughter, Dorothy.

The family prepared a room and had it repainted for her occupancy.  In it, she had her own things and pictures, and it made a little haven for her.  The last time she slept in it she said, “I love my little room.”

During her stay in Coleambally, Valma’s health continued to decline.  She was hospitalised three times and eventually required the care of a nursing home which she accepted graciously.

She loved her visitors and made note of them in her diary – phone calls were special, and going out for trips was great.  She learnt to appreciate the routine of the nursing home and joined their activities.

On her birthday in July, she came out to Coleambally to be with family.  In the diary, she mentioned the music which the children played for her, one being her favourite hymn, “Under His Wings.”

The next week she signed the papers to sell her home in Junee.  By the next weekend, she was placed in isolation due to catching the flu.  A few days later, she made a diary note of how good it was to be back in her own room.  Only two days later Valma suffered a severe heart attack, and the nurses noted the peaceful expression on Valma’s face.  Her desire had come true – to pass quickly and quietly as her parents had done.

Valma paid close attention to detail.  She faithfully filled in her Sabbath School Lesson each day.  She always wanted to know what time the sun set on Friday – loved going to church, hearing people’s news, loved checking her birthday book and sending cards to family members.  She was always faithful with her church obligations. Valma always looked on the bright side – even finding in the devil something good – his perseverance. We will miss her sunny disposition no matter what path her life took.

We look forward to being reunited again soon with our mother, sister, aunt and friend on that special day when Jesus comes to gather His loved ones home.