On the 20th September at Shepparton Church, Victoria, the missionary department hosted a special outreach evening entitled “The marriage feast of The Lamb.” This event was based on the topic of marriage on this earth and also the wedding feast in heaven. The significance being the “white wedding garment” and its spiritual significance.

The evening started off with some fun: some marriage roll-playing and a lot of laughter. Pairs of participants were called up to engage in a number of planned household responsibilities such as sweeping the floor, folding the washing, doing the dishes, and minding the baby. It was all with the intent of showing how married couples need to communicate effectually and work as a team to get jobs done in the “family circle.”

We had 34 attendees and 5 from the public (3 Sikh Indians and 2 Australians), who thoroughly enjoyed themselves. A number of young people also came up from Melbourne. We shared a 3 course buffet meal which was set out on one long set of tables as if we were all at a wedding reception. All made some new friends. A book table was also set up with a variety of our church publications, such as Steps to Christ, etc.

All were required to wear wedding / formal attire, or a wedding dress or suit that they had worn on their wedding day if they still had them. A few did, however, most of the singles were a little too shy to wear a wedding dress.

After the supper Br Geoff McCutcheon presented a small sermonette on the wedding feast in heaven and the need of having the wedding garment (Christ’s Righteousness) on.

An important focus of the evening was to help non-churchgoers; ie, non-churchgoers, who otherwise might not have come, to feel comfortable coming to a church event, who otherwise might not have come. There was a great deal of interest, and some indicated they would like to attend vegetarian cooking classes at our Shepparton Church. We are making plans for these either later this year or early next year.

We also received a good amount of donations which will be used for further missionary outreach programs at our Shepparton Church. 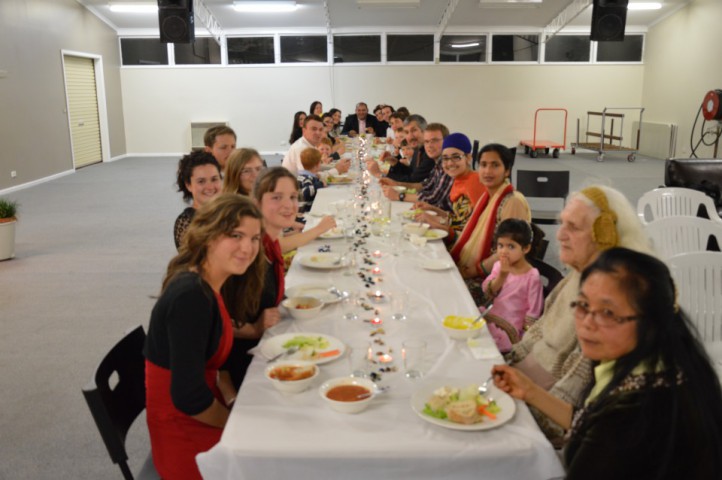