It was with great excitement and anticipation that we looked forward to the Youth Convention. A bit more planning and purchasing went into our preparations this year as we had been told that there would be three days of Wilderness Wandering – walking in nature through the Australian bush, carrying our own camping gear and bedding. That was a daunting prospect to some, whereas others were very excited about the challenge. The small tents, backpacks and sleeping bags that we bought were tried out (we even had a tent set up in our lounge room the night it was brought home), and all were measured for size and weight etc. 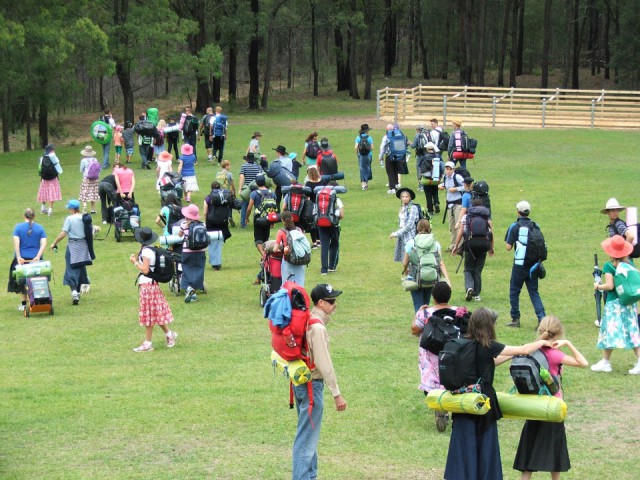 Finally the day came when we travelled to camp, arriving in time for tea and the opening meeting. After a good night’s sleep, worship and breakfast, we gathered at the meeting place to be briefed about our walking/camping trip. We were pleasantly surprised to find that there were seventy-five people eager to begin the trek. It had been well planned and thought out; and after a few extra questions, we all dashed off to grab our things, not wanting to be last or keep anyone waiting. It took longer than expected, but we finally set off along the track and after a short trek, arrived at the lunch site. While we waited for the lunch to arrive (thankfully all meals were provided and delivered by the amazing kitchen staff and their helpers, for which we were very grateful – Thank you!), we were divided into tribes – each with a name of one of the twelve tribes of Israel. We were just through with that and tarps were put up as the first drops of rain started. Some had come prepared, but the rest were all thankful for the rain ponchos provided. Everyone worked together as teams to get everything under cover and finish setting up the tarp under which to serve the lunch that had now arrived. Although the rain didn’t last long, it seemed to keep at bay the bull-ants which had threatened to cause a problem. They have a nasty bite, and unfortunately throughout the next few days a few people did get bitten.

After a hearty lunch we set off again and with the enjoyment of the company and eagerness to see where we were going to camp the night, the time and distance seemed to pass very quickly; and we arrived at our first camp site with plenty of time to choose our lots and set up camp. It was nice to see all working together.

Different tribes had been assigned responsibility of certain tasks, so each tribe knew what they were in charge of – who were to set up the tarps, take the worships, approve camp sites, etc. For each meal, four volunteers went back for kitchen duty to help out with washing up and the next meal’s preparation. Meanwhile the tents and tarps were set up for meals and morning and evening worships. We gathered together for our first worship where we learned of Contentment.

With Worship finished and the arrival of tea, we settled down to enjoy a chat over our meal and then retired to some very uncomfortable ground for sleeping. However, some of us slept anyway, and there were no complaints (murmuring being avoided). The next morning most of us rather stiffly rose to a beautiful sunny day, and after shaking the water off our tents to hurry the drying process (it had rained again during the night) we gathered for worship. It was lovely being out in nature and discussing the things of God, it made for a beautiful setting. After breakfast we packed up the tents and started along the track once again. The children and youth were eager to keep in front, even with pushing their wagons. It was lovely to see everyone being social and catching up with one another, with no media intervention, as there was no reception or power out there.

It was a bit warmer the second day and we were glad for a rest stop mid-morning. A slight deviation from our route brought us to our lunch stop where we were glad to rest and have plenty of water to drink before the lunch arrived. Some found comfortable enough spots to get some sleep. The afternoon took us through some quite sandy patches in the road and the carts and prams needed helpers to bring them through. The spot for camping on the second night was very nice and shady amongst the trees and there was a small pond through the trees beside which a few games were played. 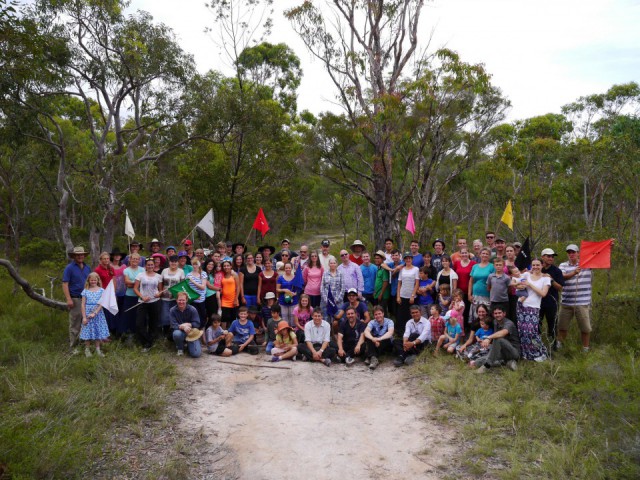 The ground was a bit softer and some extra mattresses had been brought for the neediest ones. Again worship time with more interesting Bible discussion, this time on Complaints, followed by tea and some games. With only one more day to go we settled down to a good night’s sleep.

The next morning’s walk took us through some quite sandy and hilly sections of road. It livened things up when our leader, Br Csongi, disappeared for a while and there was great confusion as to what to do next. Earlier someone in the group had tried to start a rebellion by suggesting we all hike straight back to camp rather than follow the scheduled walking/camping program. This was another test. Finally things settled down and we arrived at the lunch site where we had a barbecue lunch. Water was again first priority though and everyone was looking forward to a long drink, the water bottles being drained earlier. It was the warmest day of the hike so far. There were a few extra people that had joined in since the first day, so there were over eighty of us. The afternoon walk was probably the hardest part of the journey, but thankfully there were a lot of young helpers to assist with getting the luggage and prams up the steep, rocky parts of the road. Soon after camp was set up, on this last evening of our camping out, it started to rain quite heavily and continued into the night. Unfortunately some tents leaked and a few people did end up camping back in the dorms but only to turn up for worship back at the camp site next morning. The rain left everything fresh and muddy. After worship everyone hurried the last kilometre or so back to Elim Heights for breakfast. It was a great sight to see the sign over the gate – CANAAN. It was one of the most enjoyable campouts ever. We are so grateful for the effort expended for the youth and those young in heart. The campout couldn’t have gone as smoothly if it wasn’t for the many people working in the background; Robin and Peter transporting water, food, extra campers, kitchen staff and their helpers, toilets and a shower to the campsites; Lidia Voncina and Amy Gules and their helpers in the kitchen, preparing, delivering and serving food at each meal, out at the camp sites; and especially the huge task that Csongi undertook in planning and organizing the camp, and all who assisted in this. Thank you all so much!

Now it was time to prepare for Sabbath. Everyone couldn’t wait to have showers and get their things washed and ironed. That evening we gathered in the church for opening Sabbath with thankful hearts for a wonderful week of fellowship and looked forward to what the Sabbath hours would bring.

Next morning we studied the Sabbath School lesson, followed by the Divine Service taken by Br Radu, our General Conference Youth Leader, who had also been with us on our Wilderness Journey, with a beautiful message on “With God, Nothing is Impossible.” The afternoon meeting was wonderful with all the different songs and items of praise presented by various groups.

The evening meeting for close of Sabbath was held at the new Amphitheatre down amongst the trees. It was very special and thankfully the rain held off once again. At the end of the meeting Robin Gordon presented Sr Weymark with a plaque in gratitude and recognition of her untiring enthusiasm and effort toward the progress and development of Elim Heights and for her years of faithful endeavours in running the Elim Health Store to help finance the buildings and improvements. This plaque was attached to the Youth Hall the next day.

Sunday was the last day of camp and we enjoyed a review of the past week along with discussions and a slide show of a most memorable experience that will never be forgotten by all who participated. We thank the Lord for His watchcare and the blessing of fellowship together.