As you may have heard via news and media the island nation of Vanuatu has been hit by one of the strongest storms ever recorded in the Pacific on Friday evening 13th March 2014.  The result is major damage, devastation, some injury and loss of life.  Cyclone Pam has caused devastation in Port Vila, the nation’s capital, as well as in the outlying islands.

Vanuatu has a population of over 250,000 people and has many islands, approximately 70 which are inhabited.  The Reform Movement was established in Vanuatu in 2002, and today there are around 100 members.

Contact has been established with our brethren in Port Vila, and we thank the Lord there is no reported injury or loss of life among them, and our two church buildings have not suffered any major storm damage.  According to the information we have so far, there has been loss or damage to at least three houses of our brethren as well as damage to crops and property.

Due to damage caused to infrastructure and communications, it may be some time before contact can be made with the outlying islands and we can find out how our brethren in those areas are and assist them.  But we are sure they will be needing physical assistance with food, water and restoring or rebuilding their homes and churches.  For this reason we are asking for your assistance.  At this stage we are requesting that any donations be sent to the Australasian Union Office:

A number of people have asked how they can help.  At this stage we are making this initial appeal for monetary help – the welfare department leader of the South Pacific Union Mission lives in Vanuatu, and further updates and an assessment of the situation will become available as communication is reestablished. We will update you as soon as further information becomes available.

Thank you for your assistance and prayers at this time.

Yours in the blessed hope,

I left Perth at midnight on Sunday and arrived safely at Port Vila late Monday 6th April in the afternoon.  The trip took so long due to in-bound flight delays.  When flying into Port Vila, all that was seen were trees turned on end, trees with no leaves and the much needed shade was missing.  There were no birds singing, and devastation was all around everywhere you looked.

Have been visiting our members here. Traffic is going very slow due to having to dodge thousands of potholes and wash outs.

Took us all day yesterday to buy 30 bags of rice, Australian and expensive. Was blessed by meeting the owner of the largest supermarket chain here.

They are rationing food supplies. A man spoke to me in his antique-filled office for an hour. He gave us permission to go buy at his wholesale warehouse where I had the exact amount of money to buy bags of rice and no more for that day. We left as they closed. An NGO tried to buy more rice and was sent away one minute after I paid for our bags. We loaded the 27kg bags and drove away happy. I will distribute them this coming Sunday morning to the members here in Vila. I ordered soap, rice, salt, lentils, clothes, washing powder, toilet paper, matches, and few more essential items to be delivered by charter boat. As many boats sunk or are damaged, getting supplies out is hard.

We definitely will need more funds as I see it. Some charter flights are available at a high price. Problem is the airstrip is far from our people. So I have to wait for a specific boat, The Epi Dream. Hopefully it can come off charter doing relief work to take our supplies there. 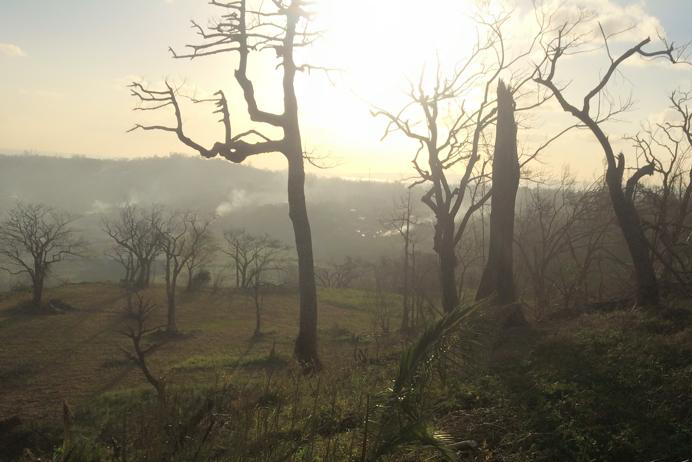 We have Br Clements here with his wife and daughter.  They are busy repairing their house which completely lost its roof. They also lost their caretaker’s house.  It was blown away. Only the slab was left. They have 15 people to cook and care for just there every day. They are sleeping in tents.  Bro. Clements showed me around. He showed me a shipping container that was moved in an angle from the force of the wind. The wind tore off the entire roof and electrical wires from his house, and rain came in and flooded everything else. His wife was looking tired from all the work. All the staple crops were destroyed especially the cabbage.

I am staying at Br Charlie’s house at the moment.  He sent his daughter by plane to Santo Island, and she brought back greens.  I was allowed to bring in some $100 worth of seeds; so first thing I bought was more seeds to send to outer islands as aid: bok choy, beans, and cucumbers. Here is hot and humid with plenty of sunshine. The first cruise ship with tourists came back yesterday which really congested the town even more. Praise God that none in the church suffered casualties. I have sharpened my brain as they want me to cook a few dishes here. Canned foods are available here but at high prices. Greetings from Vanuatu, John Lausevic

Further information from the AUC Office

The Australasian Union Office would like to thank all those who have donated thus far to this appeal.  There has been a total of Aust $22,000 (General Conference $12,000, Australia $10,000) donations received.  Our aim is to raise $30,000.  If you feel in your heart that you would like to help, please make your donations as per above initial appeal.  Thank you.