March 19th we flew over to Port Vila not knowing what we were walking into. Trudging off the plane, we were faced with crates of aid from various countries, all waiting to be slowly distributed. Brother Charlie picked us up after the arduous process of collecting our luggage from a non-operational baggage carousel, as the power was still off in certain areas.

Driving out of the airport pick-up area, I can only describe the scene unfolding in front of us to be like a battle ground. Trees were down and void of greenery. Buildings were left standing without a roof, walls, and some were stripped back to their foundations. Smoke haze stuck thick and suffocating in the air, as people had started to clean up and burn off the mountains of rubbish and debris. Housing never known to even exist, now stood visible for us all to see.

The school, by God’s grace, suffered only minimal damage to one classroom, the toilet block and the library. Books in the library couldn’t be brought back from the endless days of rain and debris that came in the gaping hole in the roof; however only days after Cyclone Pam, Brother Andrew had a roof back on and repairs made. 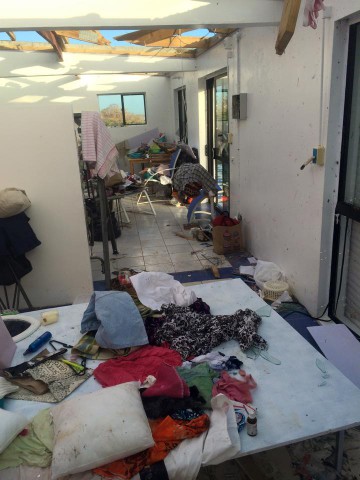 Coming over the little rise leading to our home, we honestly didn’t know what to expect for our or Brother Fredrick’s homes. To our horror and disbelief the surrounding foliage was either wind ravaged, looking burnt and shredded, gone completely or broken from the sheer force and strength of the wind. Our roof was the first thing to be spotted some 40m from our house. Laying folded in half upside down, our roof had peeled off like the lid of a tin can, taking with it the light fittings and meters of electrical cables ripped from the walls.

Brother Fred’s home was destroyed beyond repair. Thankfully during the cyclone Brother Fred and his family had taken shelter in our garage, ensuring their safety; but there was no hope for their humble home. Taking it back to the slab, we undertook the task of rebuilding in less than five weeks.

Enduring many nights of heavy rain, wind and the threat of encroaching smaller cyclones, we, with the help of Brother Andrew and his team of boys, put a new roof on our home and rebuilt Brother Fred’s home… all in less than six weeks.

The ladies, not often trusted with the hammers and tools, undertook the all-important task of keeping the many hungry mouths fed (an average of 15 mouths every lunch). Like a well-oiled machine, we all went about our tasks, and again by God’s grace and His blessings of good fortune we got everything done.

We were fortunate, as others still face a long process of recovery, but the people of Vanuatu are resilient. Even now, though, they still need our help and prayers.

I want to thank everyone who made a donation for the little churches in Vanuatu.