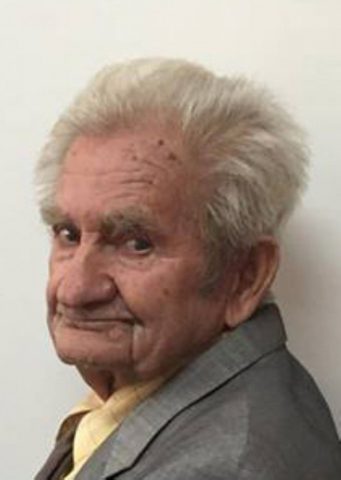 Teodor (Teso) Mandic – known as Teso or Theo, was hit by a van at 6:30am on the 14th of June 2016, in the very street where he lived. His life was cut short due to that accident. He was much loved by those who knew him, and his absence will be truly felt by many. We extend our condolences to his family and friends and hold on to the hope that we will see our dear brother again on the resurrection morning.

Teodor Mandic was born the 24th of June 1926 to Dmirtar and Milka Mandic in G Caglic Pakrac in Republika of Yugoslavia.  He was one of four children. He had an older brother Stevo and two younger sisters, Unca and Vasilia known as “Seka.” 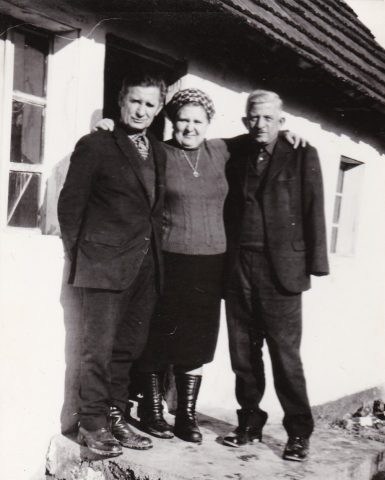 Life in Gorni Caglic was not easy for him growing up. At war time he was called into the army at a young age of 19. When he was asked to carry a gun, he could not because of his conscientious beliefs. Then one officer said, “Shoot him. He’s no use to us.” But another officer spoke up: “We can use him. He can lead the horse that carries the guns and pots and pans and be a kitchen aid.” So his life was spared. Towards the end of the war, at the most difficult time, he was baptised. 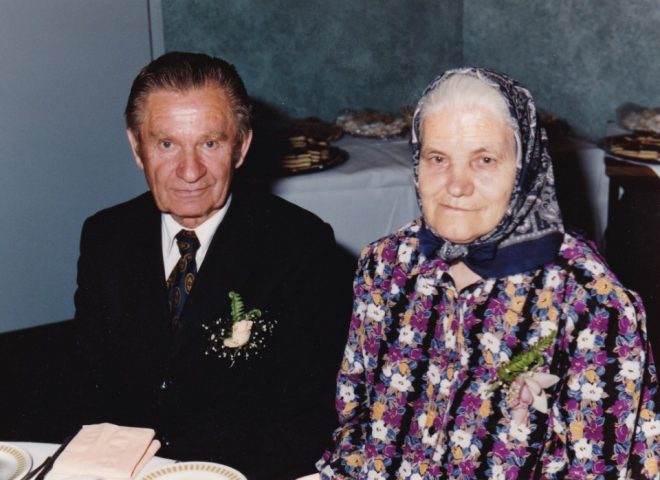 Above photo:  Teodor and Mileva

Three years later Teodor married Mileva Babic in D Caglic. Three years after that their only daughter, Dragica was born to the happy couple. Two years after that they were expecting a boy but miscarried. Teodor and Mileva both worked hard on the farm. He made his own bricks to build a larger home for his family mainly because when his daughter married into a big family, his plans were for all to live under his roof. BUT…. His daughter had other plans. Eventually when he realised that the house was never going to be built, he was advised to go and get a trade and work in Germany obtaining his bricklayer’s license in 1968. While in Germany working, at church he met his future son in law before his daughter met him. Therefore, Mileva used to say—you chose your son in law before your daughter chooses her husband. In January of 1969 Dragica and Stephen met in church in Kovacevac. And three months later they were married and left for Australia. Upon arriving, they  immediately worked on papers for Dragica’s parents to come out. Seven months later they arrived and lived together with the Riskos.

Stephen found Teso a job working in the pencil factory for approximately six months. Hating indoor work, unknown to us, after work, he would go searching for outdoor work. He found work as a brickie’s labourer for three Australian brick layers for 15 years, learning English along the way. He stopped working because he ended up with a strangulated hernia. He recovered after his operation, finding another job concreting, forming and pouring many driveways etc. 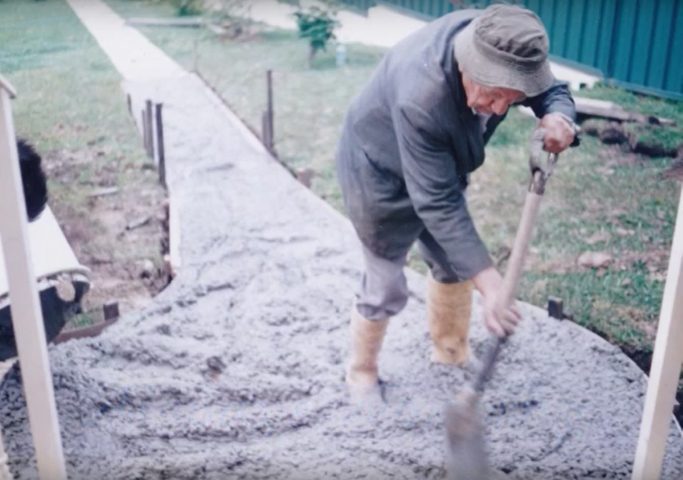 Together with his grandsons, they helped each other! And he also helped many other people towards their new homes, free of charge. He also monetarily supported his family overseas over the years. All the while his loving patient wife cooked, cleaned, washed his work clothes, and cared for him.

When the war in Croatia commenced in 1991, he brought relatives and friends over as refugees, and together, he and his wife, helped these families to get on their feet!

After one of his operations, he stayed at Dragica’s and Stephen’s place for two months, every single day threatening to escape on the bus home. So after two months, he did go home promising to behave himself and not to work. So Dragica drops in to check in on him at the end of the first day. Teso tells Dragica, “I’ve been good today, relaxing.” Then she goes to leave, and his neighbour tells her he did four lawns that day. His comment was, “How dare she dob me in!”

He prided himself in driving distances for work, helping whoever needed him. Once he drove his car into a signpost, unable to go forward or back, begging NRMA to fix his car, saying he would pay anything just to continue driving. Then we found out at that time he had a cataract and macular degeneration in his eye leaving him very sad, but he accepted that he could still get around with public transport. His driving days were over. His son in law then helped him, driving him wherever he needed to go. Or otherwise, those that needed him picked him up! When it became too hard to travel he busied himself working locally mowing lawns, up-keeping gardens etc.—anything he was able to help his neighbours with. He looked after their pets, gutters, rubbish bins. Finding it hard to use a whipper snipper, he would cut the edges with an axe.

He was well known for being punctual, always an hour or two before arranged times, all the way till the end. He travelled to church here at Schofields by public transport and then walked. He wouldn’t have it any other way.

Forty-five years he was at Ritchie street, Granville enjoying his wood fires, and we all enjoyed roasting chestnuts, baking potatoes, and he never had to buy fire wood. The neighbourhood always supplied.

He always had so much love to give especially to his grandchildren and great grandchildren. Always helpful to his son in law, just letting him know I’ve done this, I’ve done that. For seventeen years he lived alone. On the fourteenth of June 2016, ten days before his 90th birthday, he got up early as normal and did what he always loved to do—help others. He always prayed to God never to be a burden to anybody. His prayer was answered. His life tragically came to an end. We are comforted to know that he fell into a coma and didn’t suffer. 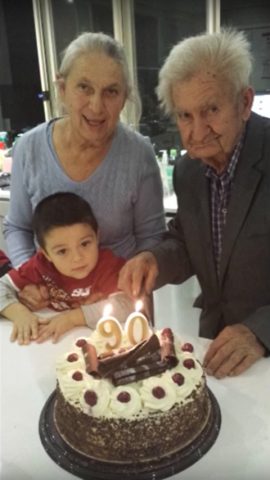 We hold onto the blessed hope if we are faithful to see each other on the resurrection morning.

The news of the tragic accident can be seen on:
https://au.news.yahoo.com/video/watch/31834893/sadness-after-rosehill-fatal/#page1

A slide presentation of Teodor’s life shown during the funeral service can be viewed on: https://youtu.be/I4DnY_Pj3ww

The graveside service can be viewed on: https://youtu.be/Qr8tByu06mA

Dorothy Risko, Teso’s daughter, requested the following poem to be read during the service:

Who will you serve?
Written by Jared Chapman

Long ago, at the beginning of time
The thought of death had not even entered our minds.
We were created to live a life of peace
Where life in Eden would never cease,

Till one man sinned, which brought a curse
That all hearts were deformed since their birth,
Thus death had to pass over all on this earth.
We were all destined for an eternity beneath the grave
Until God gave His Son, for the world to be saved.

With the weight of our sin He hung there and died,
The lowest of all deaths, He was crucified,
That through His sacrifice we might be purified,
To have the promise of eternal life, with His Spirit inside.
He stormed the gates of hell and rose again
So eternal life could be free for all men,

That when He returns we can be changed in the twinkling of an eye
And experience a freedom that money can never buy,
To dwell forever in a place where no one will ever die.

And on that day our sin will be erased,
And we will stand holy and blameless before His face,
All because of what Jesus Christ has done in our place.
O, what amazing grace!

And we don’t deserve it.
He lived the life we couldn’t and died the death that we’re all deserving,
Clearing the debt that we could never pay
So that we no longer have to live like slaves.
Now for you and me He lights the way,

That now we have the choice to follow the One,
The crucified lamb, God’s own Son,
For our race on this earth has already been run,
The battle has been fought, the victory has been won.
Now He has given all power to change,
To take away your past, your life of shame.
You just have to believe on His name.

This life on earth is like a sunset that will soon fade,
And when you’re buried beneath the grave,
Will you have been saved?

Before you return to the dust of the ground
Seek your Saviour while He may be found.
For all lost sinners His grace still abounds.

Never stop to think that your life here may be worthless.
You see for the long lost sheep, Jesus still searches,
Because it cost so much for you to be purchased.

That’s why He’s still standing outside at the door of your heart,
Knocking each day, never wanting to eternally drift apart,
Coz all He wants is a relationship with you and me to start.

Immortality is freely offered to all through His Word.
Today the decision rests with you, who will you serve?

The time on earth you have is getting shorter every day.
Now is the time to turn around, and follow the way
The truth and the life, to Him you need to pray.
For the time is coming when you will fade away.
You see, all your actions come with a price that you soon will have to pay,
And when you stand before Jesus, what will you say? 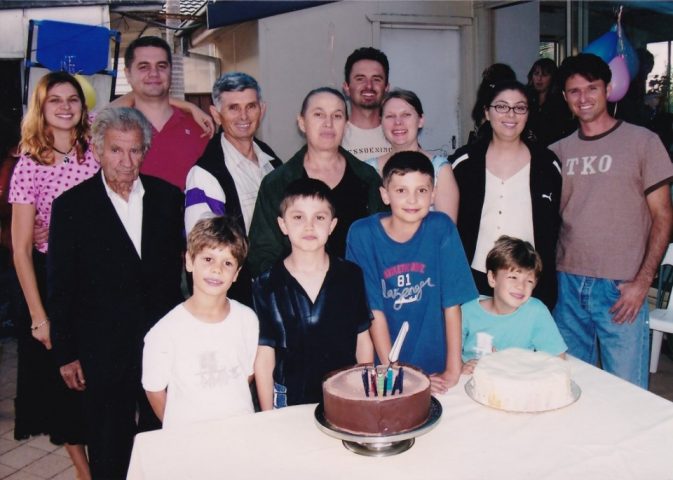