Only two weeks? How did we end up with only two weeks to plan a concert, practice and organise everything that we would need? But two weeks was all we had. Missionary school was fast approaching and with so many other things to think about, the concert had slowly crept up on us. But with God’s help and a herculean effort from everyone, a concert came together which ended up being a full house and was such a blessing for us as we were able to really see God’s hand in everything. It was only through His help that it happened. That was four months ago.

This time around, with the travelling troupe returned, now as EMC graduates, with many amazing memories and great experiences behind us, we began planning a second concert. The first concert had been to raise funds for our missionary school tuition fees, and this concert was given in thanks to the generous sponsors the first time; but also, all proceeds from this concert would go towards repairing the roof of the Clayfield Church.

It was with great excitement and anticipation by the Cornerstone Youth that we came together Sunday morning to have a final rehearsal before the concert. We set up tables outside where we would provide light refreshments after the concert and went about making final touches such as organising the microphones and arranging church pews.

At ten minutes to three in the afternoon, I had a quick peek inside the church to find the pews quite filled, and at 3:00pm our concert began. It has always amazed me how similar a concert is to an iceberg. So much goes on behind the scenes, like designing and printing flyers, distributing flyers, organising the concert space (arranging pews, tables, chairs and microphones), cooking and setting out the food (a huge thank you to all the cooks for the food, by the way; it was the icing on the cake! Pardon the pun). So the tip of the iceberg was made up of some beautiful items with a few original songs from the group such as “Cry of the Poor” by Elisabeth Balarezo, “Carry Me Father” by Lachlan Reyes and a few others such as “Falling in Your Arms Again” by Melissa Otto.

But if I could describe my favourite part of the whole concert, it would have to be when twelve young people were standing up there together, singing with one purpose and soul, like we always have, the song, “Thank You Lord”. I can only say that it was a time-stopping moment and I feel as if we drew a little bit closer to heaven. It is in moments like these that I can not only feel the power of God-given music, but also see it working in my life, in the lives of the young people who are creating music and in those who love and appreciate it. If there was any other better reason to create, perform and simply music I don’t know what it is but I know that music is a power for good. It is a power that leads us either away from Christ or to Christ and His love. Music can help us make a decided change in our lives…. This concert was titled “From my Heart”, and it really was from all our hearts, the place from which Christ’s love can flow out of us to bless others. 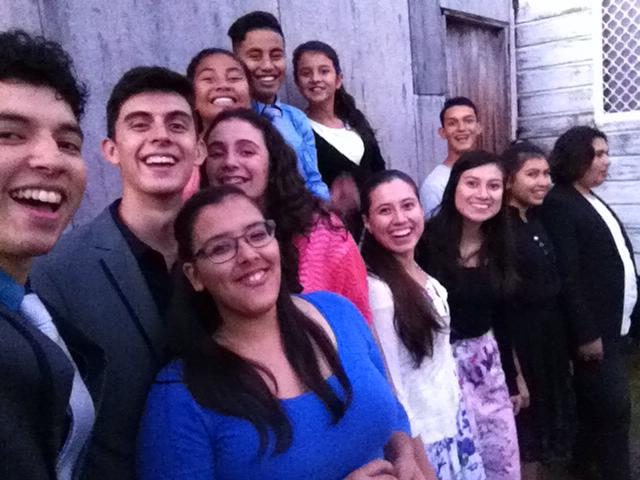