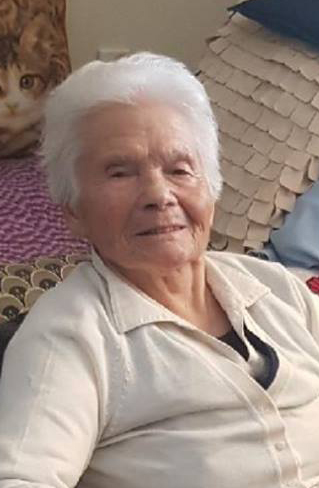 It is always with sorrowful hearts, that we express our deepest sympathies to the families of those who have gone before us.  Once again, our hearts go out to the family of late Sister Desanka Stamenkovic, who fell asleep in Jesus on the 17th September 2017.  Sister Stamenkovic was a member of the Slavic Church.  May God strengthen each one as they mourn the loss of their loved one.

“For if we believe that Jesus died and rose again, even so them also which sleep in Jesus will God bring with him.  For this we say unto you by the word of the Lord, that we which are alive and remain unto the coming of the Lord shall not prevent them which are asleep.  For the Lord himself shall descend from heaven with a shout, with the voice of the archangel, and with the trump of God: and the dead in Christ shall rise first:  Then we which are alive and remain shall be caught up together with them in the clouds, to meet the Lord in the air: and so shall we ever be with the Lord.”  1 Thessalonians 4:14-17

Eulogy as portrayed by her family:

Desanka Ilic later known as Desa and also to many as Baba, was born on the 30th April 1928 at Guberevac.  Guberevac is a village in the municipality of Sopot, Serbia.

She was the middle child of three; Mara, Baba and Branko.  Baba also had a half-sister who tragically died in her 20’s.  Baba was the last surviving child of the three siblings.

Baba met Jimmy, her future husband, at a gathering where music was played.  Baba and Jimmy both loved the piano accordion.

On February 2nd, 1953 they were married.  Later they became parents to four beautiful children: Miriam, Dawn, Sandra and John.

Life was difficult in then called Yugoslavia and Jimmy heard that Australia was a lucky country; so, on January 29th, 1970 the family arrived in Sydney.  Coogee Immigrant Hostel was their home for a short time.  Eventually, they made their home in Granville.

Baba had worked for a short time in Sanitarium, AWA and Rolf Simmons.

After a short illness, Baba passed away, on Sunday 17th September 2017 around 9:45pm.  During the last few days before falling to sleep she was able to speak and see her four children, five of her grand-children and one great-grandchild.  Her end was peaceful.  Her son John and daughter Dawn and son-in-law Alan were with her when she fell asleep.  There was no pain, but during that time in Baba’s room there was a blessed peace. 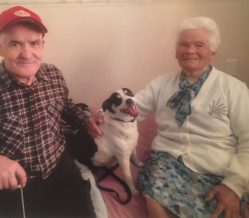 Baba was a lady of simple means with a loving heart. She shared her love in growing flowers, she shared her love with animals and she shared her love with everyone.  This is why people loved her and always sharing an open house with all people.  It was no secret to Baba’s love as she had a faith in God and shared this love to all saying: hello brother, hello sister…  Baba and her husband loved God and were devoted to the faith of the Seventh Day Adventist Reform Movement.

Baba is survived by four children, eleven grand-children and five great-grandchildren.  Children loved to eat Baba’s doughnut ‘krofne’, as she was one of the best doughnut makers and she also crocheted some amazing danglings to give to her friends.

Baba had very limited English, but had learnt how to express love for the grandchildren.  The XPT as it pulled in to Moree station packed with people, maybe gave her this saying as she said to the children: “I love you full train”.

Baba will be remembered by many as a beautiful kind soul who always had a smile on her face.  We look forward to meeting again at Jesus feet.