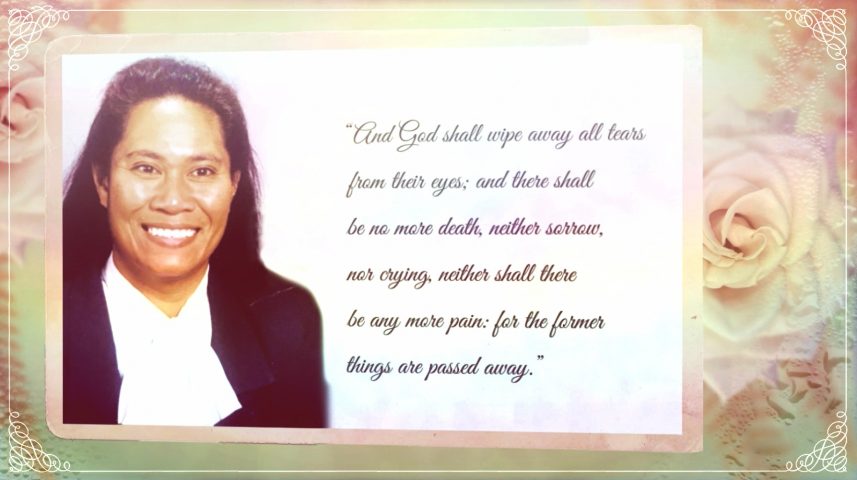 We wish to extend our deepest sympathies to the Foaese and Ah-ching families on the loss of their loved one.  May God continue to strengthen each one of you throughout this difficult time.  Our dear Sister Vaovai Foaese had in her heart a wonderful missionary spirit.  Her desire was especially to spread  the good news of the gospel to those of her homeland, Samoa.

May she rest in peace until the coming of Jesus when we look forward to seeing her and our loved ones again, nevermore to part.

“Let not your heart be troubled: ye believe in God, believe also in me.  In my Father’s house are many mansions: if it were not so, I would have told you. I go to prepare a place for you.  And if I go and prepare a place for you, I will come again, and receive you unto myself; that where I am, there ye may be also.  And whither I go ye know, and the way ye know.”  John 14:1-4.

Here is a special recollection of Vaovai’s life from her daughter, Tanya Ah-ching:

Our mother was born on the 20th of April, 1956 in the village of Vaovai Falealili, in Samoa. Mum came from a big family and was one of 13 children, 10 girls and three boys. Our mother spent most of her young life living away from her parents and being raised by her uncle and his family as this was and still is common practice in Samoa. Mum went to school as far as year 9 and was forced to discontinue her schooling as there was much to do at home in working the plantations and looking after the family. Mum was an individual that was hardworking, committed and consistent in all she did. You could almost say that she had a case of OCD as she would be very particular in a lot of things that she did. She very much disliked seeing things out of place or unclean, and this was something that was instilled in her from a very young age. Mum would always tell us stories of her life growing up in Samoa and how it was never easy and the fact that she didn’t have much of a social life because her time was always spent in trying to finish each day’s family duties.

In the mid 1970’s mum’s eldest sister assisted her to migrate over to Christchurch, New Zealand for a better life and to assist their parents in Samoa. Mum settled down, finding work in a local factory in which she met dad in 1978. Mum would tell us that though dad didn’t have a car, he had the next best mode of transportation which was his push bike that he used a lot to pay mum secret late night visits. On May the 26th 1979 after a short period of time courting, mum and dad were married followed by the birth of their eldest child Ray in August 1979.

In late 1980 mum and dad made the move over to Sydney, Australia where they stayed with family until they settled down in Auburn. Mum and Dad stayed with my aunty and uncle who were pastors in the SDA church. Mum very much disliked the SDA church and all that it stood for and did not wish to know or have anything to do with the church, but while living with my aunty and uncle, they had ground rules about the Sabbath that made it hard for mum and dad to ignore.

On May 1st, 1982, mum had their second child, Ryan, but due to difficulties during his birth, he was stillborn. Also during this year after many Bible studies with my uncle and aunty, mum and dad finally accepted the Adventist message and were baptised in the Adventist church.

In May 1983, a daughter and third child Tanya was born, but something else special happened during this year. After becoming members of the Adventist Church for only one year they were introduced to the SDA Reform Movement Church after taking a dislike to some of the SDA Church practices; and after going through a series of Bible studies with Br. A C Sas, they were fellowshipped into the church to which mum was a member of till she passed away. If anything can be said about mum, it would be that she was diligent in studying God’s Word and labouring in spreading the truth to all she came in contact with especially her own country men and women. She tried endlessly to talk to her families about the truth we have but was either mocked or isolated because of this. Nevertheless, this never stopped her from doing what she loved and lived for.

In March 1991, Ryan was born, (named after the late baby Ryan) and being the baby of the family was mum’s beloved child. If anyone could get away with committing a crime it would be Ryan, but mum always saw otherwise.

In 1998 our Nana moved over to Sydney from Christchurch so that mum could look after her. Mum gave up her job, and over the next 6 years mum cared for her till she passed away in late 2004.

Mum had a spirit of giving and helping anyone that needed help wherever she could, whether it were friends, family or complete strangers; and she was truly blessed for doing so. Mum and dad always wanted us to know the importance of family values, and we are so thankful for this because it has made a huge impact in how we run our own little families today.

In October 2016 mum made the move to Samoa to live with Dad where they both lived till mum passed away. She will be truly missed as they had a huge impact on the ongoing church in Samoa. Mum and Dad decided to offer a piece of their land so that the church in Samoa could move forward and expand there. This was mum’s final service for the Lord and His work before passing away unexpectedly on the 9th October 2017.  After mum’s repatriation, a beautiful church-filled family service was held on Wednesday evening the 18th October followed by a memorial service on Thursday the 19th October 2017 at the Schofields Church before she was laid to rest at her final resting place at the St Marys General Cemetery.

Mum leaves behind 6 grandchildren and another one on the way. Mum loved her grandkids so much and did all she could for them physically and more importantly to her, spiritually. There is something about a love of grandparents towards their grandchildren that is different from a love between parents and their own children, and this was clearly evident with mum and the grandkids. The grandchildren were truly the apple of her eye, and they were always the hot topics of our conversations. Many times, we would find mum in the middle of the night on her knees in prayer, and we knew that it was for us, our children and for God’s work.

Mum was the rock of our family, the superglue that held us all together no matter what. She now leaves behind a legacy that we only hope we can continue on in our lives. The encouragements, the example she set, as well as the vigour she had for God’s work are what we pray can be instilled in us and in our children.

To lose someone so close to your heart so suddenly is something that’s always hard to comprehend, but what makes our healing process a little easier is knowing that mum believed in the hope of life eternal, and so for now she is only sleeping for a time awaiting our Lord’s soon return where we can see her and all our loved ones again if we are faithful and true.

We thank all who have kept us in their prayers over the past few months; we truly appreciate your thoughts and prayers during this time. The Lord is helping us one day at a time, and we truly hope that as time goes on it will get easier.

Rest in Love mum; we will love and miss you always.