The twenty fifth of December two thousand and thirteen, proved to be a very important day in the history of the Australasian Union Conference (AUC) of the Seventh Day Adventist Reform Movement. During the thirty third delegation session held at Elim Heights Youth Camp, forty six AUC delegates were present in session and voted unanimously for the formation of an Islands Union Mission.

We thank the Lord that the spreading of the gospel throughout the islands developed in such a way that it was possible for a new Union to be born. The admonition found in Matthew 28:19-20 was taken to heart by some brethren: “Go ye therefore, and teach all nations, baptizing them in the name of the Father, and of the Son, and of the Holy Ghost: Teaching them to observe all things whatsoever I have commanded you: and, lo, I am with you alway, even unto the end of the world. Amen.”

Our gratitude goes to God who helped the island delegates receive their visas on time and be able to attend this special delegation session. The fellowship and unity was felt by all who came from diverse places; it was truly a very blessed and moving experience for all the attendees from the seven islands of the Pacific to organize their Union.

The name chosen for this new union was “South Pacific Union Mission” (SPU Mission). This Union is made up of several mission fields from the various nations and territories of the South Pacific, they are: Fiji, French Polynesia, New Caledonia, Papua New Guinea, Samoa, Solomon Islands, Vanuatu and other islands. 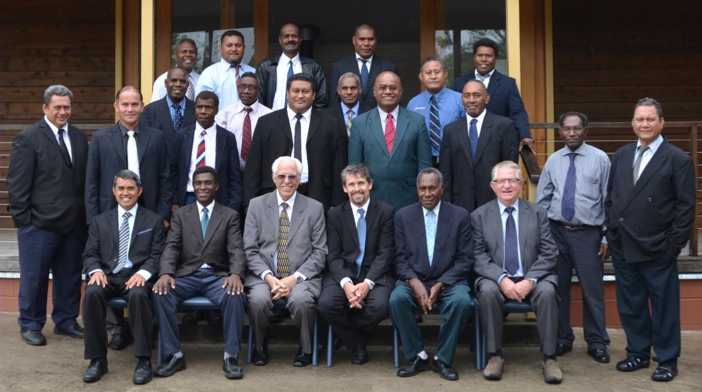 The headquarters for the South Pacific Union Mission is situated in Vanuatu and the elected officers for SPU Mission are the following:

In its first ever session SPU Mission has taken the initiative in setting its calendar of events to include the following important events:

We would like to share some of the early history of how each of these fields heard of the Seventh Day Adventist Reform Movement (SDARM) message and the developments that took place through the years.

In the year 1972, a young Adventist by the name of Samson was visiting New Zealand from Fiji; he found the Seventh Day Adventist Reform Movement (SDARM) name in the telephone directory. He contacted our church office in Auckland and Br Mili Vukotic, the worker there at the time, answered the call. After a long conversation Samson was offered Bible studies which he accepted. Six months later he was fellowshipped into the SDARM church in New Zealand. Not long after he became a member he returned to Fiji and started sharing the truth with others. Samson then invited Br Vukotic to go to Fiji as there were a number of interests. Br Vukotic spent about three weeks in Fiji giving Bible studies and upon returning to New Zealand, correspondence was kept up.

November 1973, Br Vukotic together with Br A C Sas spent another three weeks in Fiji. The first Sabbath eight people attended the Sabbath School in a rented apartment. One soul was ready for baptism so arrangements were made for the baptism to take place in a faraway creek at midnight. Two more souls were fellowshipped and the Lord’s Supper was given. During that time the first wedding in the SDARM in Fiji was also performed—the wedding of Br Samson. This is how the first glimmer of light entered into this beautiful country.

Over the next few years the General Conference took charge of the work in Fiji and somehow contact with Australasian Union Conference (AUC) was lost. In 1997 the Fiji Mission Field was reestablished by the AUC.

Through the work of Brethren John Ciric, Mervyn Southwell and Chris Greehan this field was once again built up. The brethren in Nadawa built a temporary church which seated about sixty souls.

In February and March 1999 Br Southwell spent a month visiting Fiji and was joined by Br John Ciric for their Field Conference entitled “Restoring the Divine Institutions”. There were visitors in every meeting. After the conference they spent time visiting different villages together with Br Eliki Kenivale who was the Field Leader at that time, thus the message had spread, many studies were done with those who were interested in the truth. A much needed diesel four-wheel drive vehicle was purchased so the brethren could go and visit many more villages in spreading the gospel.

In October 2002 there were six places within Fiji where our members met for church services. Brother Ben Thiel visited at that time as the Australasian Union Conference Youth Director.

Satan is not happy to see the truth spreading, and constantly seeks to destroy the work which is being done in the name of Christ. Although Fiji has had its up and down experiences over the recent past years we thank God that the truth has been preserved and a light is still shinning strong in this beautiful country where sixty faithful souls are standing for the message of Reformation. The Seventh Day Adventist Reform Movement was registered in the government on 10th October 2010. We thank God for the way He has cared for His flock in the Republic of Fiji.

French Polynesia is made up of many islands. Tahiti is the main island where Pape’ete, the capital city is located. French is the official language spoken, although the Tahitian language (Reo Maohi) is widely spoken. Once again contact with our church was made through New Zealand. Mark Manutahi from Tahiti was visiting Auckland with his family and found our church. There he met with Br Mili Vukotic. After asking many questions and having studies he returned to Tahiti with the message of Reformation.

Br Vukotic then contacted Br Sas in Australia to send over some literature which was done but unfortunately it never reached the destination. Two years later Mark Manutahi contacted the General Conference as he had their address and requested Sabbath Bible lessons in French which were then sent from France. During the first four weeks of holding Sabbath School at his home, the numbers increased to around one hundred people.

In July 1982, three people from Tahiti went to Los Angeles to learn more about the Reform Movement. They had a meeting with Brn Dumitru, Moreno, Palazolo and Sas. In September Brn Vukotic and Sas went back to Tahiti to visit. Again they stayed about three weeks visiting and conducting Bible Studies. We praised God that on Sunday March 20th 1983 the first fruits of the message shared were harvested with the baptism of twenty-four souls. The French Polynesia Mission was then organized. Further on in July of the same year, another six souls were baptized. One of the persons baptized was a brother from Bora Bora who had been lost at sea for one hundred and fifty five days, ending up in a small island of American Samoa; his story was published in the Reader’s Digest 1946. Now in Bora Bora stands a beautiful chapel where believers come together to worship each Sabbath and Wednesdays.

The French Polynesia Mission was promoted into a field at the General Conference delegation session in 1991 and now they have joined the South Pacific Union Mission.

The first contact from New Caledonia was received in 1983. The brethren in Tahiti were asked to correspond with the person in New Caledonia. In September 1984 the first five souls were baptized by Br A C Sas. The group was then organized and the New Caledonia Mission and was duly incorporated on September 12th 1983.

(Continued in next edition of Good Tidings E-News)

Commenting has been turned off.