July 2014 will mark 100 years since the outbreak of World War 1. It was this crisis that led to an open schism within the Seventh-day Adventist ranks throughout Europe, and the consequent formation of the Seventh Day Adventist Reform Movement.

The issue that led to the rift was the European SDA leadership’s decision to commit the SDA Church in Europe to the taking up of arms in combat, including on the Sabbath. The SDA Church members who protested against this decision were subsequently disfellowshipped.

Despite official efforts to reconcile in 1919, 1920, and 1922, and unofficial efforts in the early 1980’s, the SDA Church and the SDA Reform Movement remain separate organisations to this day. Part of the reason for that separation is a firm belief that “God’s remnant people, standing before the world as reformers, are to show that the law of God is the foundation of all enduring reform…” (PK 678) Regardless of what the world may do, God’s “authority should be kept distinct and plain before the world, and no laws are to be acknowledged that come in collision with the laws of Jehovah.” No matter what the law of the land may dictate to us, we believe that, “if in defiance of God’s arrangements the world be allowed to influence our decisions or our actions, the purpose of God is defeated. However specious the pretext, if the church waver here, there is written against her in the books of heaven a betrayal of the most sacred trusts, and treachery to the kingdom of Christ.” (TM 16, 17)

In standing “in defense of truth and righteousness when the majority forsake us,” or fighting “the battles of the Lord when champions are few” (5T 136), we may bring to mind those great Reformers and martyrs of the Dark Ages. But, we should not forget that in our own denominational history, there have been many young men and women who loved not their lives unto death. In love for the truth and the honour of God, many faithful Adventists stood firm for the truth during World War I, refusing to bear arms, or transgress the Sabbath commandment. For many, that stand cost them their lives. History repeated itself in World War II, when faithful members of the Seventh Day Adventist Reform Movement faced prison and death in defense of the law of God.

Commencing in this edition of Good Tidings E-News, we would like to remind our readers of our these heroes of the faith—men and women who, as Christians and Reformers, stood in defense of the truth and righteousness, regardless of the consequences.

The record of these witnesses for Christ, will be taken from the book, And Follow Their Faith, a compilation of remembrances of some of those who gave their lives while in prisons and concentration camps during World War II.

From the introduction to And Follow Their Faith:  “More than twenty years have passed since the terrible Second World War ended. Much has been spoken and written about that time. In several places memorials have been erected as a reminder of those inexpressible sufferings. In that time of great apostasy when the fury of war did its destructive work and the god of war was worshiped and glorified by nominal Christians, there were still people who had the courage to acknowledge Jesus as their Lord. They knew that salvation could be found in only One-Jesus Christ. Through love for their Lord they fulfilled His will; they ‘loved not their lives unto death’ and courageously stood firm for their precious faith.

“Faith is proven in times of testing. Thus the period under the rulership of the swastika was also a hard test for God’s people. The purpose of the Reformation has always been to educate soldiers under the cross. During that trial of World War II, these soldiers of Christ proved themselves victorious – faithful unto death…

“This publication is of special importance now, for today we fight a completely different kind of battle. From that time to our own day, many a hand has become feeble, many a banner which had been kept aloft through united efforts has been conquered by the enemy and buried in the dust. And yet the pure, holy gospel still lives and is preached in all parts of the world; these martyrs saw with the eye of faith that the battle of the church is not in vain. This battle would have been in vain if the church were content to lead a complacent life after such a time of trial and persecution. Therefore we cannot betray these faithful witnesses by choosing an easier way; we are called to take up the work and continue it where these champions were forced to lay it down. This book’s purpose is to point with unmistakable clarity to the fact that the battle of the Church concerns only the confession of Jesus Christ, the one Lord and King of kings, and that the church surrenders when the confession of Jesus Christ and His sacred truth is no longer its highest goal.” 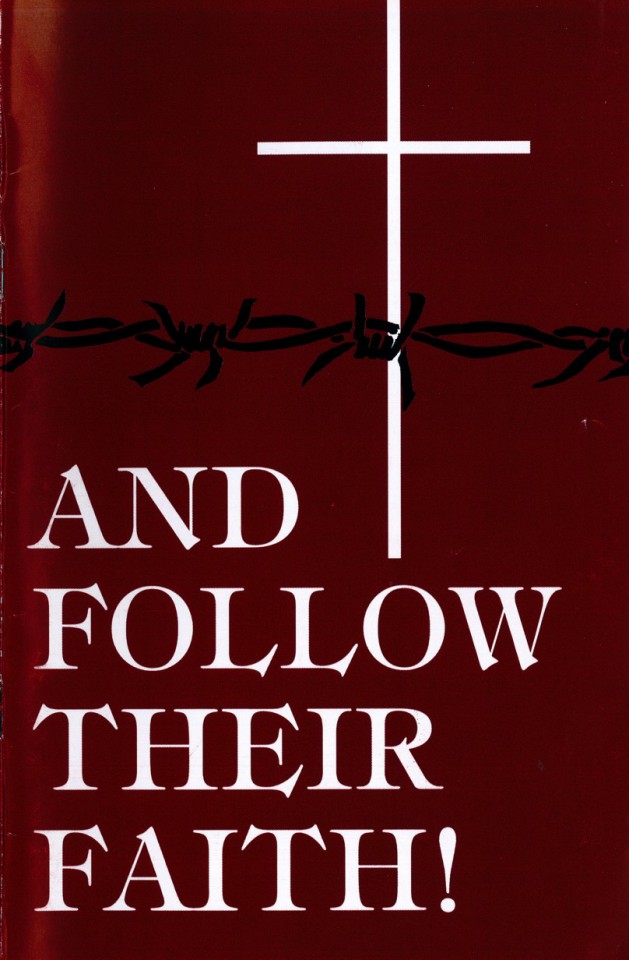 “In reviewing our past history, having travelled over every step of advance to our present standing, I can say, Praise God! As I see what the Lord has wrought, I am filled with astonishment, and with confidence in Christ as leader. We have nothing to fear for the future, except as we shall forget the way the Lord has led us, and His teaching in our past history.”—Ellen G. White, Life Sketches, p. 196 (1902).