It was on Sabbath, 13th December 2014, the day where the churches of the Seventh Day Adventist Reform Movement were reading on the focal topic:  “The Doctrine of the Remnant”.  Right after the fellowship lunch in Auckland Church, the whole band of

members and friends met at Shelly Beach to witness the baptism of Brother Billy Te Kahika Jr. and Brother Douglas Thirkettle.  It was a wonderful day where our brethren from Auckland district, New Plymouth, Palmerstone North, and friends from Hamilton and Thames were gathered together. On that day two souls were added to our church in Auckland.  To God be the glory! 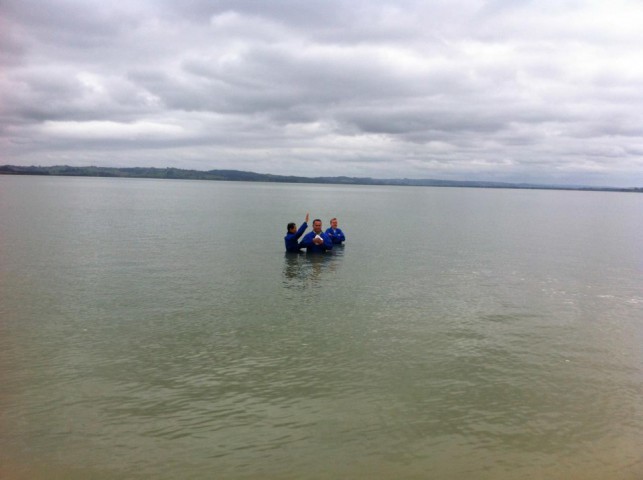 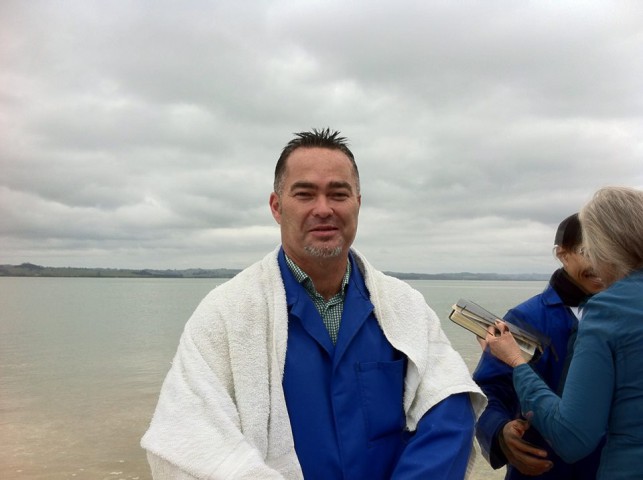 One of my first memories as a child is praying to God at night for protection, and I can’t remember who told me there was God, but I knew He was there – somehow I just knew even though my family was not Christian. When I was about 11 years old I had Christian neighbors who first gave me the story about Jesus, and when I was 12 I said the Lord’s prayer and asked Him into my heart. All this was with the help of the lady who lived next door who kindly showed me the love of Jesus.

But when I was 16 and with the introduction to my dad, I fell into the world of new age and mysticism, which verged on spiritualism; and for 3 years I lived in darkness until a strange event.  My father had a new age conference at his house, and we had left-over food.  So he asked me to deliver the food to a friend of his who too was also having a gathering – but his one was a Christian meeting.

Again, from this the Lord entered my life. After starting a Christian walk, I encountered the Adventist message, which I adopted.  I was baptized at the age of 21 and soon after became a famous musician which tore me from my walk with Jesus.  I then had about 6 years without the Lord, and I experienced the pain that comes when you walk away from Him. After this, I came across Seventh Day Adventist Reform movement through an Adventist uncle – I knew that I had found a home and that the message was truth. I then went away from it and 5 years later came back again.

Five years after that, I was baptised this past December as a member of the church. To do that I had to give up my music career which had been my life – but compared with what God has done for me this is a small price to pay on my part to be in God’s family.

When I look back, I cannot believe how patient God has been with me and the protection and mercy He extended to me while I was in the valley of decision. I praise Him and thank Him so much for everything he has done for me and my family.

I thank Jesus with all my heart for His love, mercy and grace and for putting me in God’s church.  I pray that with my recent election to help church missionary work that God will use me to bring other people home to His church in preparation for His Son’s soon return to take His children home to heaven.  Amen. 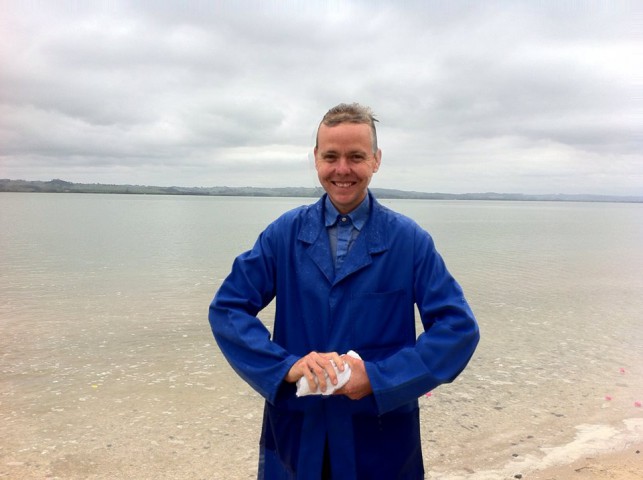 It was an autumn night of the year 2014.  With a bowed head and on bended knee, my silent prayers ascended to heaven.   A small tear formed in the corner of my eye, and growing, it broke free from its home, first rolling and then running down my cheek, dropping to the floor where it was soon followed by another, then another, until a steady cascade of large, hot tears of grief accompanied my now breaking and mournful appeals to God for the forgiveness of my sin and freedom from its bondage.

“But it is happened unto them according to the true proverb, The dog is turned to his own vomit again; and the sow that was washed to her wallowing in the mire.”  2 Peter 2:22.

The gospel that my life was molded around began in the Sunday church, continued in the SDA main church and was established in the SDA independent ministries.  This is that gospel: ‘Believe in Jesus for the legal acquittal of your sins and repent and turn from your sins and you will have a title to heaven and with everlasting life, escaping the punishment of eternal death.’

I felt like the Israelites in Sinai. I had the law, but keeping it seemed impossible. I knew I had to repent and turn from sin…but how? Like Paul I cried, “the good that I would, I do not: but the evil which I would not, that I do. O wretched man that I am! Who shall deliver me from this body of death?”

It was a deficient understanding of the plan of salvation that saw me locked in the cycle of falling, rising, walking, even running and then falling.  Someone told me this was sanctification, and the process would go on until you finally built the strength not to fall and were able to stand.  One person estimated this could take 21 days so new neural pathways could develop if you didn’t yield to sin during that time.  Another said the process was a work of a lifetime and would be complete at the close of probation, the end of your life or under the great test of the Sunday law.

If I only sought Jesus for the reward of eternal life, or to escape the punishment of destruction, I would be at ease with this gospel.  But my tears spoke of the grief I held in my heart for crucifying my Saviour afresh and denying my Lord in the presence of angels.  It wasn’t pardon alone that I prayed for but purity of heart: freedom, victory, perfect deliverance from the bondage and defilement of sin.

I began to collect and read books on how to find and live the life of victory.  Like the morning sun, the light of truth began to shine on my soul, dispelling the dark shadows of falsehood, error and deceit that had bound me to sin.  Then one day I read a sermon by brother A. T. Jones entitled, “Creation or evolution…which?” As I read it, it was as if he was perfectly describing my condition…I was a spiritual evolutionist! My eyes were opened…the scales of blindness to my own spiritual poverty and weakness fell from my eyes.

I found where I had diverged from the truth: I had been trying to find a way to make an unclean thing clean, washing it with the nitre of good works and law keeping, and taking much soap of effort, will power and human techniques.  But now I was discovering that regeneration is not an improvement or transformation of my old life, but an entirely new creation.  I was born again in repentance, not merely in theory or in assent to an ideology but in a new, living way.  A practical, tangible, life-changing experience.  I found God’s forgiveness as not only pardon for sins that are past, but the reclaiming from sin’s iron grip.  Jesus was now to me a truly divine Saviour.  He had saved me from my sins, taken them away from me and cast them into the depths of the sea.  Instead of working with my strength that I thought was God’s strength, I now trusted in God to uphold me with the right hand of His righteousness and by His free Spirit.  Victory was not to me a final event that involved the establishment of my strength and power above the lure of temptation, but a moment by moment relationship with Jesus where I had complete distrust of myself accompanied with an entire dependence and reliance upon Him: that He would be faithful who promised to keep me from falling.

Then it happened one day during some research I was doing on the ‘1888 message’, I came across a website informing me of a movement formed and founded upon this message.  Could it be? Not just fellow believers but a whole church built upon the truth I now loved and thirsted after?  I must know more; I must find these people!

Excitedly I devoured the online Present Truth Correspondence Course and soon after contacted the SDARM Australian Union who put me in contact with A. Pedrosa of New Lynn, Auckland.  After his visit to Thames, along with Bro. Sam Batger, I decided to leave my job and my friends and move to Auckland to be in contact with this church.  So I did.  Studying with Bro. Pedrosa, I learned the importance and divine implementation of organisation, the history of the SDARM, its place in prophecy like Rev. 14 and sister White’s prophesied reformation of the SDA church, and the doctrinal truths the church professed.

I was convinced that prophecy established the church, history confirmed it, and its doctrine seemed as pure and clear as a mountaintop stream.  Only one question plagued my mind: Was this still God’s people? Or had He departed like He had from the Jewish, early Christian, Protestant and mainstream SDA churches?  The only way I could think of how to ask God to reveal it to me was by whether or not it taught the truth that had freed me from my known sins and turned me to rely on Jesus instead of myself.  Did they have the everlasting gospel?

I held Bro. Pedrosa as the means by which God would confirm or deny my desire to know the truth…and although my brother is merely a man, I knew God could answer my prayer through him.  What was his position on justification? Did he hold it as only a theory for the legal declaration of pardon for sin, or the experience of a new birth, the creation of a new Christian in the image of God?

We had studied the theory together, but did he believe it? Would he preach it? I waited week after week…sermon after sermon, listening, hoping, desiring for the confirmation to my prayers.  Then one Sabbath he presented, “Christ Our Righteousness,” as the afternoon lecture.  My spirits soared.  From that day I knew that this was God’s church: I had asked God to teach me His way, and He had revealed a plain path.

After completing the required studies with my friend, brother and pastor, I was ready for baptism, to be a member of the body of Christ and to give myself to His service.  I had at last found rest from my long wanderings. I had finally found what I had been looking for: my church, my work, my home, my family.