“I Will Come Again” 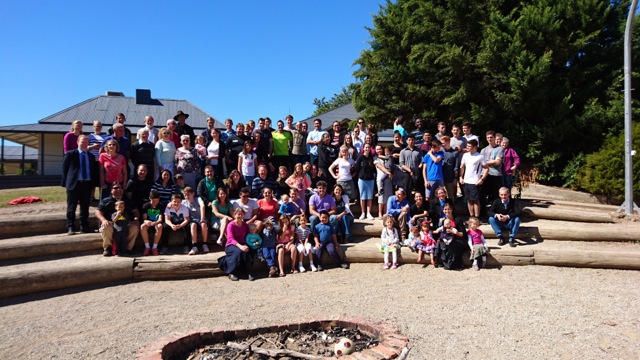 We arrived at camp early Friday afternoon and settled in. We then went to catch up with people we knew and to meet people that we didn’t know.

This year’s Victoria camp was held at the same location as last year: a beautiful setting with a small lake and hills rolling along the horizon. The theme of the camp was “I Will Come Again,” and the meetings covered various aspects of preparing for Jesus’ soon coming. “Promise of His Coming,” “Your Fitness for Heaven,” and “Outline of Final Events” were some of the topics presented throughout the weekend.

First event on the program was tea, which we thoroughly enjoyed; then Br Larry Ah-ching opened the Sabbath with the evening worship.

Sister Roxanne Fountain took worship early Sabbath morning. She spoke about signs in relation to Christ’s return. We need to be able to read these signs.  Br Benji Fuenzalida took Sabbath School and the various groups separated for the lesson: “The Call of the Church.”

A choir consisting of the Melbourne Choir, the Missionary Students, and anyone else who wanted to join, sang a beautiful rendition of “What A Day That Will Be” to replace the first hymn in the Divine Service. The Melbourne Choir also sang for the second hymn.  Br Paul Chapman took the Divine Service on “Another Pentecost Promised.”  When using the ratio of the population then to the population now, we have far more resources available today than the apostles had in the years after Jesus’ death.  Imagine what we can do today when we let the Holy Spirit work through us!

After the service we had a delicious lunch, at which over 150 people were present.

Next on the program was Young People’s Meeting run by Sisters Susanna Mandic and Lily Escobar. A number of children’s items were presented first up in the meeting.  Many songs, a poem, and a couple of activities were presented throughout the afternoon.  Sr Susanna had people with specially placed coloured stickers under their chairs come forward to sing an item.

After Young People’s Meeting, Br Larry Ah-ching provided the youth with Bible games while they walked around the lake. Then we ate a delicious meal after which Br Serban Ionita closed Sabbath.

Sabbath evening, we had a great time socialising and getting to know the Missionary Students.

The Missionary Students took most of the meetings, putting into practise what they have learnt. It was great to meet those we hadn’t met before, some coming all the way from the US.

Sunday morning, we were up before dawn and Br Herold Etes from Suriname took worship at 7:00am.

After a scrumptious hot breakfast, Sr Elisabeth Balarezo took a workshop on “The Remnant and the Seal” and had a number of activities and discussions incorporated into the meeting; and Br Jordan Chapman took a workshop on the “Progress of Current Events” where we learnt about current events in relation to the end of time. These workshops were run simultaneously and were repeated so that the two groups could enjoy both.

Just before lunch a group photo was taken, and then we enjoyed another great meal. Sr Esther Boje and Sr Cati Szabo made appetising food throughout the camp and catered some delicious replacements for the gluten-free people.

On Sunday afternoon we had great fun with the activities provided. First was rock climbing, and then we harnessed up for the high ropes course.  Also, in the afternoon we went boating on the lake and had a lot of fun there.

After the evening meal Br Doug Thirkettle took worship with an “Outline of Final Events.”

Into the evening, a group of us enjoyed an inspirational, impromptu concert with Sr Elisabeth Balarezo on the cello and Sr Daniela Balarezo and Walter on violins. They played special requests with beautiful, harmonious improvisations.

Monday morning Br Abraham Dumaguit took worship on “Are You Prepared & Ready?” We must make our decision to follow Jesus now and not hesitate until it is too late.

After breakfast and packing and saying goodbye, we were on the road for home with many great memories of a great camp.

I thank God for a wonderful time of fellowship and spiritual refreshment.