On the 24th September 2016, Pimpama Group had a missionary outreach afternoon organised by our missionary leader Sr Cecilia Arias, where everyone was involved included our young people. After prayer and words of encouragement to one another, some went letter boxing in Rochedale area, while others went door knocking getting to know their neighbours and offering a free copy of the book The Great Controversy, around the neighbourhood area of Livingstone College where they have their worship meetings every Sabbath.

The outcome was very encouraging, especially coming from the young people. They all had different experiences. They introduced the book to the people by asking them some interesting questions on the book content, such as: What is the world’s destiny? Why were sin and suffering permitted? Who are the angels? Can the dead speak to us? The responses were very good; some groups delivered three books within five minutes, and they came back praising the Lord. Eleven books were left in the homes, and there were five responses from letterboxing, with a total of sixteen books delivered.

I would like to encourage you all with a couple of Ellen White’s inspiring quotes:

The results of the circulation of this book [The Great Controversy] are not to be judged by what now appears. By reading it, some souls will be aroused, and will have courage to unite themselves at once with those who keep the commandments of God. But a much larger number who read it will not take their position until they see the very events taking place that are foretold in it. The fulfillment of some of the predictions will inspire faith that others also will come to pass, and when the earth is lightened with the glory of the Lord, in the closing work, many souls will take their position on the commandments of God as the result of this agency.” — Colporteur Ministry, p. 128. 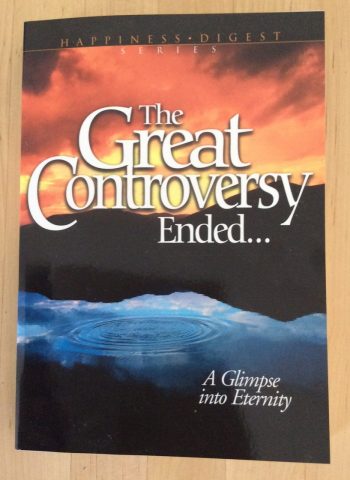 “The book The Great Controversy, I appreciate above silver or gold, and I greatly desire that it shall come before the people. While writing the manuscript of The Great Controversy, I was often conscious of the presence of the angels of God. And many times the scenes about which I was writing were presented to me anew in visions of the night, so that they were fresh and vivid in my mind.” — Ibid.

We are all looking forward to the next missionary outreach here in Queensland, and we thank God for the privilege and everyone for their help in this endeavor. May God bless you all.