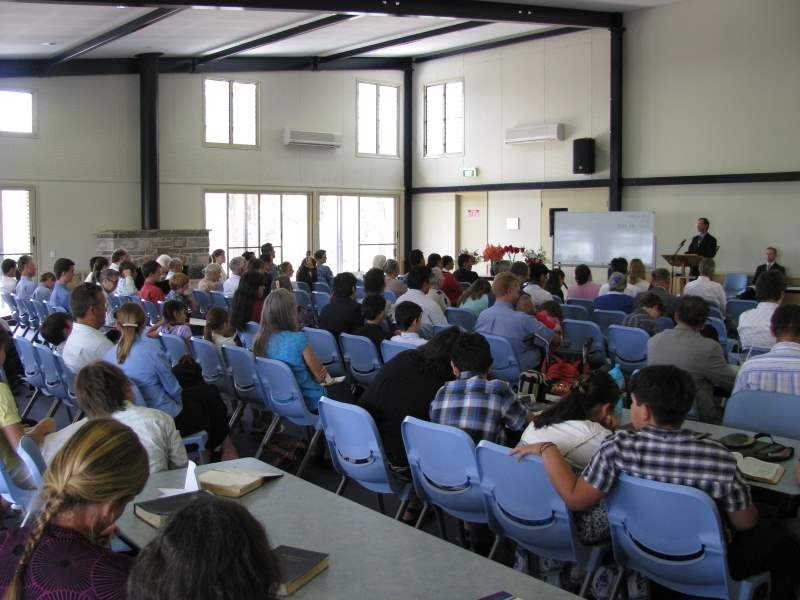 The Conference was held in the beautiful surroundings of Somerset Dam located 1.5 hours north of Brisbane city. Worship meetings and the youth meeting titles included, ‘Growing Under the Early Rain’, ‘What the Holy Spirit Does’ and ‘The Latter Rain – Who’s Holding it Back?’. These were taken by Br. Lotsi Honti, Sr. Sandra Barnett and Br. Anton Klemens respectively.

The major meetings included the following:

Opening of Conference – “The Voice Behind You”
Based on Isaiah 30:21, Br. Gerson Robles dwelt on how the still small voice of God is heard. “Conscience is the voice of God, heard amid the conflict of human passions…” 5T 120. The story of the priest that dedicated Jesus at His first presentation in the temple (from Luke 2) was brought out showing how blind a religious person can become when the voice of God is drowned out by the passions and double-mindedness of man.  There was a man there however, Simon – who was sensitive to God’s Spirit and he recognised the child Jesus as the Messiah.

Divine Service – “Christ’s Most Essential Gift”
Based on Mattew 7:11 and Luke 11:13, Br. Joe Voncina (AUC Union, Secretary/Treasurer) spoke on how great is the gift of the Holy Spirit. This was a most stirring message which brought to light our utter dependence upon this gift of God – who “makes effectual what has been wrought out by the world's Redeemer.” DA 671.2

Br. Joe also expounded on this statement from the Spirit of Prophecy, “Whenever minor matters occupy the attention, the divine power which is necessary for the growth and prosperity of the church, and which would bring all other blessings in its train, is lacking, though offered in infinite plenitude.”  AA 50.1

Closing of Sabbath – “Avoiding the Unpardonable Sin”
In this study, Br. John Araya showed the steps one is in danger of taking that lead to the sin against the Holy Spirit. He showed how dangerous it is to try and silence the voice of God speaking to us through His Spirit. “The sin of blasphemy against the Holy Spirit does not lie in any sudden word or deed; it is the firm, determined resistance of truth and evidence.”  FLB 58.4

Sunday Morning – “Ten Times the Power”
This study was the last of our conference and was taken by Br. Paul Chapman. The study was based on a single statement made by Ellen White which says, “You are getting the coming of the Lord too far off. I saw the latter rain was coming as [suddenly as] the midnight cry, and with ten times the power.” SpM 4.3.

Br. Paul explained the history of the midnight cry in the advent movement and how this statement applies to us today. He also calculated that in the time of the disciple’s Pentecost and their commission to spread the gospel; there were 120 disciples in the upper room to about 300 million world population. An impossible feat without God! Similarly, with a world population nearing 7 billion today we despair without God. But the same power given them to accomplish the work will be given to us – multiplied by ten.

Saturday Night Concert
Br. Hayden Wiseman, his brother Sam and NSW youth vocal group Focus held a violin and singing concert after closing Sabbath that brought a soothing and uplifting influence to all present. Our thoughts were lifted up to God as we contemplated the words of the hymns and the rich music accompanying them. Praise God for this ministry in music that adds to the blessings received at such an event.