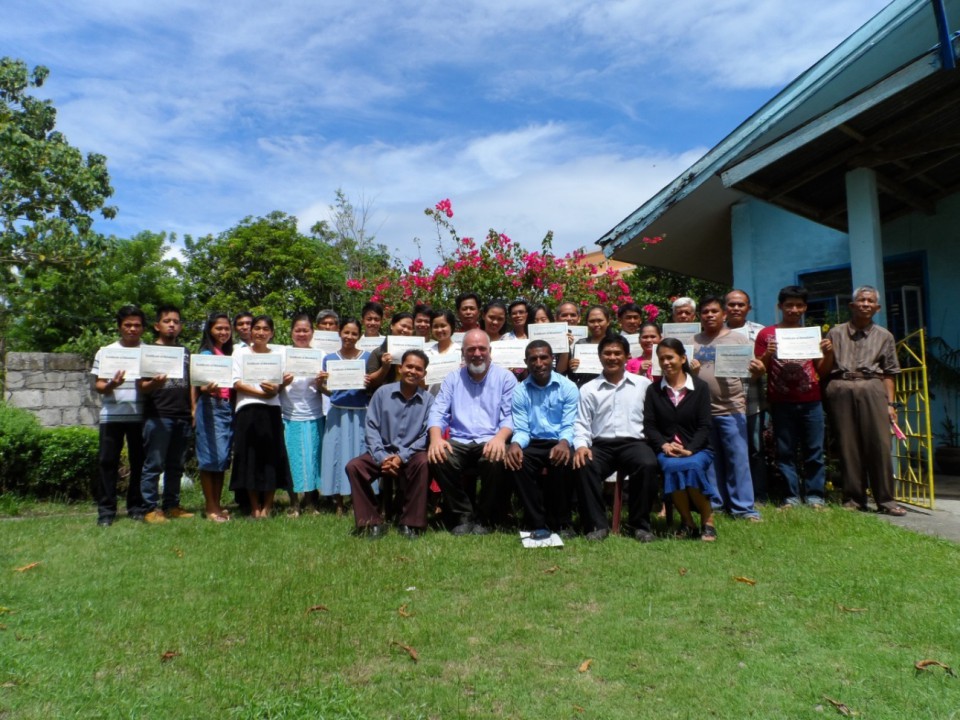 Australia’s ties with the Philippines have a long history of church cooperation. Beginning in 1958, Brother D. Nicolici visited Davao City.  This initial visit led to more and more visits until a group incorporated themselves as Seventh Day Adventist Remnant Church.  Since this visit, until now, many members have joined the Reform Movement, and to date this has grown to over 500 members on this Island alone.  A week-long seminar was held in the Digos City Church property which is Southern Mindanao’s Conference Headquarters established long ago.  This city is a 90-minute drive from Davao City.  Although it was harvest time, many farmers and members along with church workers attended the week-long seminar on Organic Farming and making of Bio- Fertilizers.  Many wonderful experiences were made, and old friendships from my first visit to this country almost 29 years ago were renewed.  Many acquaintances recalled the times of Br and Sr Milivoj Dimitrijevic and also Br Steven Barat and some of his family members during their time spent in Philippines.  They also remembered travellers like Sr Sandra Barnett and Mary Barnett Wiseman and their visit many years ago.

After completion of the seminar many brethren expressed the desire for a future seminar in Mindanao.  They said “please come back to the ‘Fruit Basket’ of the Philippines”.  A short day trip was taken to visit a “Garden of Eden” park/compound surrounded by a very tall walled fence to keep people out.  Interesting plants were seen along with landscaping and a “Pastoral Palace” belonging to the Television Minister who owned the park.

After an un eventful flight back to Manila, Br Ian Lepo, who accompanied me on this trip, and I presented another week-long training seminar in BTMS  also known as Bible Training Missionary School in Cabatang, Quezon Province.  This property was established in 1990 after being shifted from Paenan area of Quezon.  Here more intensive sessions were held for the missionary school students, along with over 30+ attendees–farmers, gardeners, and people with an interest in farming.  Hands on sessions included Calamansi Tree Plantation Restoration, Tropical Bio Fertilizers, Compost Pile Building, Manufacturing of Bio Fertilizers, Organic Gardening and Garlic and Tomato Growing.  Every night was capped by an agriculture-related movie on health, canning, making your own soaps and permaculture methods.  Many people are trapped in the chemical fertilizer cycle, and this was a good experience for them to see that organic farming is possible especially in the tropics.

Several years ago Br Rolly Dumaguit the GC Regional Secretary requested Agriculture Seminars be given to our brethren in Philippines.  Due to time constraints and illness I could not give them.  The brethren there were disappointed and new dates were established.  But then those were postponed as well due to a lack of finances for travel.  After typhoon Yolanda, the need for the seminars was even greater.  Generous assistance was then given to the Philippines by the Australian brethren.

Although much time has passed since my first visit to the Philippines, poverty has not been erased.  Many of our members are still living hand to mouth, and agriculture is a way to improve their incomes.  You can still see to this day, the needs of the poor will always be among us.  Having and giving is a blessing to each one of us, and every time I visit a country with poor people in need, it is a constant reminder to me that I have much to be thankful for.  Please give generously towards the poor and also the work of the Welfare Department of the Australasian Union Conference.  Much more can be done but funds are always lacking.  An additional “Thank You” is given to the Philippine Union for transport and hospitality, and to the volunteers who gave generously of their time to cook and attend to the needs of all the attendees at both locations.

While still in the Philippines, I was also able to travel to the typhoon stricken areas, with a generous donation of funds from a sister in Australia.  Those devastated areas were without electricity for two months, and to this day, only basic services are available, and the needs are many.

Because of the typhoon’s tremendous force, we lost two church buildings.  One church has been rebuilt by the brethren there.  There is a word in Tagalog, the local language, “Bayanihan” which I learned is a wonderful word for welfare work.  It is the cooperative undertaking; a concerted effort, especially, the act of working together in mutual aid.

“Bayanihan” was used to restore and rebuild the Ormoc City Church which was damaged. However, due to circumstances, the Bogo City Church cannot be rebuilt on the previous site.  The brethren there have purchased a small block of land, but since the time of my visit,everything there is at a standstill, as they do not have funds to build.  They wish to build a cement-block structure which will withstand cyclones.  The brethren there need funds to accomplish this endeavour.