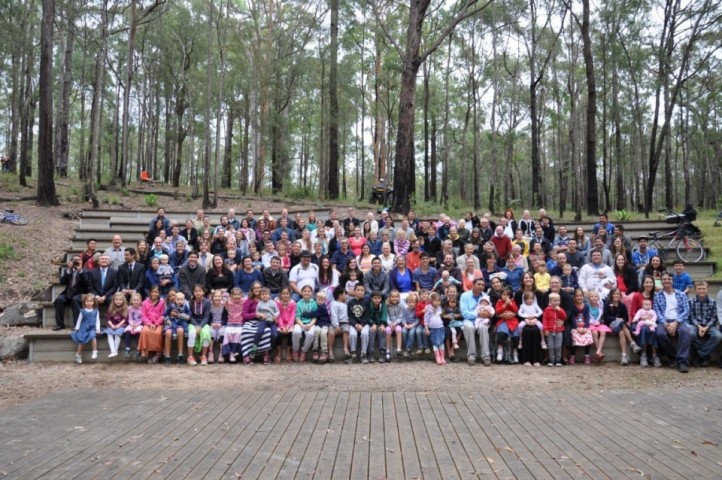 In December 2015, many of us gathered at Elim Heights for the Education and Family Camp. We initially were expecting about 100 or so people to stay on site for the camp and were blessed with over 200 people staying at the camp ground. A significant point of interest was that we had a very large number of children at the camp, most of which were under eight years old. It was lovely to see many familiar faces as well as some new faces. We were all there to learn how to better educate our families for eternity. With this in mind, we began our conference with a study on “Making the Sabbath a Delight”, by Br. Gerson Robles. What better way to train our children to love the Sabbath, than by making it a joyous day! 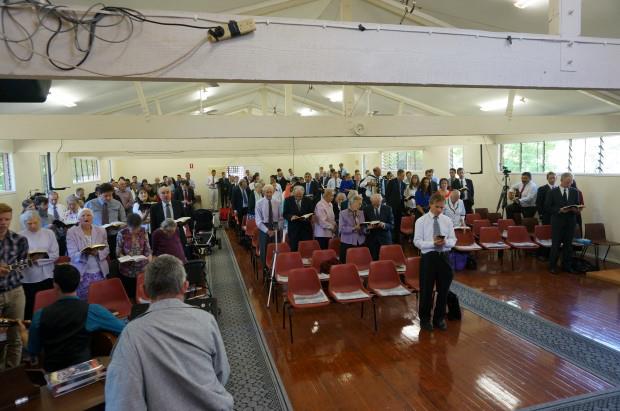 On Sabbath, we were blessed to have even more visitors coming along. Our Sabbath School was conducted by Br. Sam Batger, the AUC Sabbath School Director. At the children’s Sabbath school there were somewhere between 60-70 children in attendance.  That is the largest number of children at camp I (Vesna) have ever seen in 20 years living in Australia. The children’s room was at full capacity that day plus another junior class met under the new pergola. There were also a large number of youth.  Sis. Mary Wiseman and Sis. Marion Brown did a wonderful job with the children’s programs that day. There were also a large number of youth present in the youth Sabbath School class. 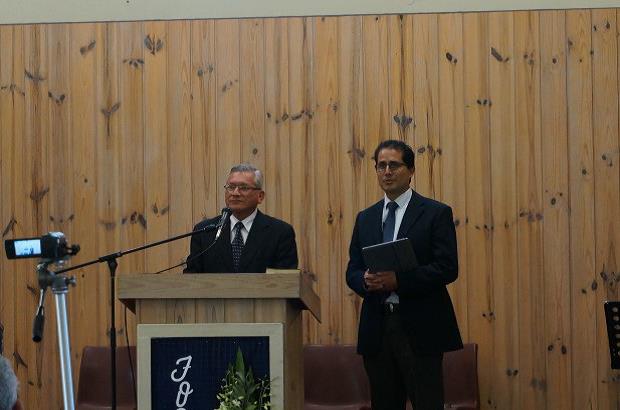 We were privileged to have our GC Education Department Secretary, Br. Mario Alvarado to take our Divine Service entitled, “The Most Effectual Sermon.” Our families are truly the greatest witness we can give to the world of the reality of Christianity. He who is a Christian in his own home will be more likely to be a Christian elsewhere. Br. Csongi Matyas conducted our Young People’s Meeting on “The Family Firm”, in which he focused on having family items presented. We enjoyed the lovely presentations. They were very inspiring. After the Young People’s meeting, we had some really nice Bible/Nature Activities prepared by Sis. Danica Tyler. She had several different activities in small paper bags, and each family could choose which one they liked. 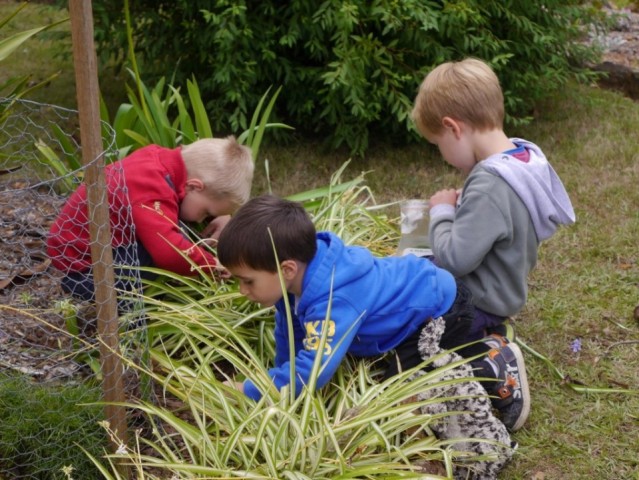 The activities were geared for different age groups. A group of young people chose one activity to do together as well. Our next meeting was for the closing of Sabbath, where Br. Peter Lausevic presented a study on “Renewing your Walk with God.” It was a very inspiring appeal to come to a higher experience with God.

Sunday morning set the regular round of routine for the remaining days of the camp. We began each morning, including Sabbath morning with morning worship done within each family/dorm area. We also provided a worship service in the church for those who chose to go there, from Sunday morning on. The morning worship material was provided the night before, so those in charge were able to choose from what was provided and adapt the material to their own families, for example if they had small children. After morning worship and breakfast, we began with a short meeting. Sunday’s meeting was on “Raising Strong Spiritual Young People”, by Br. Nathan Tyler. Br. Nathan gave us some practical guidelines of how we can help our children to be strong. To begin with, we must have a strong Christian experience ourselves, as parents. We then had a study by Br. Paul Chapman on “Where is your Focus?”, in which Br. Paul encouraged us to put our focus on eternal things. These things are the only things that will endure. We then divided into discussion groups. Br. Paul Chapman and Br. Ben Thiel each had a session on “How to Have a Happy Marriage.” There were many comments and much helpful discussion. Br. Nathan Tyler, Br. Csongi, and Br. Peter all took a large youth discussion group on “How to Find the Right Person for You.” The youth were encouraged to put spiritual considerations first and to look at a wide variety of qualities. We then had lunch, followed by a session of practical activities. The choices of activities were knitting (assisted by Sis. Weymark and Sis. Lidia Voncina), woodworking (assisted by Br. Madelin Duna and Br. Johnny Gules), soap making (with Sis. Rosemary Voncina), candle making (with Sis. Erika Szabo, Sis. Faith Pow, and Sis. Fulga Batger), massage and injury prevention (with Br. Amos Thiel), and foot massage and relaxation (with Sis. Susan Lausevic). Everyone seemed very busy and very happy, especially the children. 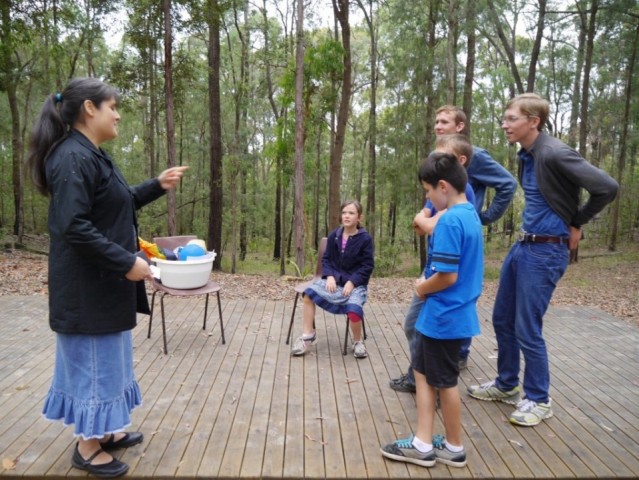 For those who finished early, Sis. Kelly Payne-Reyes and Sis. Diana Amaya organised a team building activity which many of the youth and children enjoyed. It was great to see the youth carrying some of their younger team members along to help the team finish quicker. After dinner we had the evening worship presented by Br. Arnaldo Pedrosa entitled “Prayer and Personal Bible Study”. We were encouraged to make these two things a priority in our lives. We also had a time of sharing afterwards.

On Monday morning, after breakfast, we had our first study given by Br. Jacob DeSouza entitled, “How Should We View Media?”. Br. Jacob challenged us to put our personal Bible study first in our day, before we go on our social media. He encouraged us to fill our brains with uplifting things instead of just empty information. Br. Mario Alvarado then presented a study on “Educating our Children for Eternity”, in which he encouraged us to focus on providing a spiritual education for our children. We then divided into groups to discuss “Meeting Homeschooling Challenges” with Br. Nathan Tyler, Br. Arnaldo Pedrosa, and Sis. Vesna Kraus; “Working with Conventional Schooling” with Sis. Lidia Voncina and Sis. Deborah Chapman; and “Making Godly Career Choices” with Br. Csongi Matyas and Br. Peter Lausevic. I believe we all gained valuable information from our discussion groups. After lunch we had another team building activity done by Br. Larry Ah-ching and Br. Dominic Polistina. We learned about four different birds and their characteristics. We were encouraged to figure out which one we were like: the dove, the hawk, the ostrich, and the owl. Each have bad communication qualities. We were encouraged to realise what the weaknesses of each are and try to avoid the pitfalls each has. After a lovely evening meal, we had our evening worship entitled, “Family bonding”, taken by Br. Alex Pausch, who was visiting us from Austria with his lovely family. We were encouraged to do things together to bring us closer together as families. We also had a time of sharing after the study.

On Tuesday, after a wonderful breakfast, we had a thought-provoking study by Br. Ben Thiel on “Educated to Be Thinkers.” We were blessed to be able to be in the amphitheatre after colder weather on other days. Br. Ben spoke to us about the importance of us educating ourselves to think on good things rather than on evil things, as happened to the majority in the days of Noah. Br. Rolly Dumaguit then took the next study on “Outstanding Christian Men and Women”, among whom he mentioned Daniel and Moses and the great example they are to us today. Our group discussion followed on “How to Stand Firm for God,” led by Br. Jacob DeSouza and Br. Dominic Polistina. We also had impromptu discussion groups on improving communication in marriage led by Br. Paul Chapman and Br. Sam Batger with the men and Sis. Fulga Batger and Sis. Deborah Chapman with the ladies. After a lovely lunch, we had a session on Family Games done by Br. Gerson and Sis. Catherine Robles. Some of the games involved walking blindfolded through a “mine field” of small plastic balls with a guide, jenga blocks, and deflating balloons in relay teams. The participants then received a bookmark listing eight keys to a connected family. We then had our final worship on “A Healthy Family Environment” taken by Br. Paul Chapman. Many things make up our environment, including where we live, our associations, and those things we bring into our homes. We then were blessed with a slide show of memories of the camp. During the slide show, Br. Keith Robertson decided to play familiar tunes to accompany the photos. Before long, most of those watching were singing along to the lovely music. Many expressed that this session with the slides was the most memorable of the whole camp. It was a lovely spirit to end the camp on. Many, many people volunteered to help out. Sis. Stela Gules did a wonderful job of organising teams in the kitchen to do the cooking. The food was fantastic. Many others helped out in many other ways. The team doing the children’s programs was fantastic as well. Many thanks to Sis. Lidia Voncina, Sis. Vesna Kraus, Br. Garry Kraus, Sis. Mary Wiseman, and Sis. Marion Brown. How they kept so many small children occupied and happy was great!

Cameron Thiel: “This was by far the best camp I have attended.”

One group of little children were crying when they had to leave camp.

We truly pray that as a church and as individuals we will be able to nurture our little lambs in years to come, to encourage our youth and adults alike, that we will be able help them all grow their faith and their friendships. May the Lord help us to all work together to strengthen one another and to continue to be willing to help out in future camps. We are so thankful to all the volunteers, even though we can’t name each one here. Some of you helped out at the last minute, and some of you did something you haven’t done before. You are all much appreciated. And for those who couldn’t help out, we really are thankful that you were just able to come.