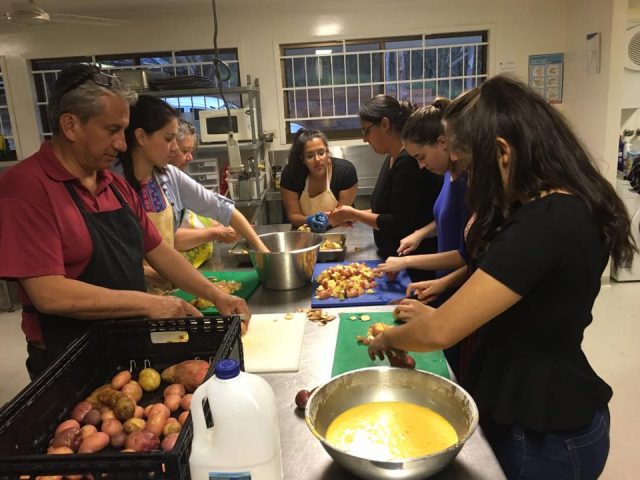 Sunday afternoon: Someone gets a call from Sister Monica Balarezo, who received a call from a volunteer soup kitchen she and her family help out. Today, no one turned up except the assistant cook. Fortunately, God had seven of us young people ready to stand in with Monica, Fernando and the assistant cook. It was such a blessing! At 3:00pm, we met up at a hired commercial kitchen, where we set about peeling, chopping, boiling, blending, baking and whizzing up a feast. Three hours later, we loaded everything into a purpose-built, kitted-out van and drove down to the city centre park. When we arrived, there was no time to lose in setting up tables under a gazebo and laying out the food trays that were ready to be served to about 100 people. As we all stood in a line with serving spoons in hand, we eagerly served out pumpkin soup, cauliflower bake in creamy white sauce, quiche and curry (there was much more) and then dessert. So many people in such a short time! In about 30 minutes we were done; and just as quickly as we had arrived, we packed up and headed back to the kitchen to clean up. Another hour or two was enough to have the place and gear shining; and after having a prayer together, it was time to go home for a restful sleep.

While at the kitchen, I heard stories about how this ministry has continued to help people in the Brisbane community. One of those stories was about one guy who drove to Brisbane seeking to start a new and exciting life only to have his van with all his worldly possessions stolen. He was without money and had no place to stay for a long time, and he expressed his heartfelt gratitude for the food, warmth and friends that the kitchen provided. Another man had been coming every week for a couple of months until one night he spoke to the crew saying he would not be coming anymore. He had been homeless, jobless and helpless, and the kitchen had kept him going during his hardship. He had been attending for the three nights the soup kitchen ran (Saturday, Sunday and Monday) every week until that night. Now, he didn’t need to come any more because he had been given a job, he had found a place to stay and life was looking brighter. He too made his grateful thanks to the crew for the wonderful work they were doing for others. For me, it helped me obtain a better view of the people whom God has given us to help. Sure, some take advantage, but for even the few who are truly helped, I thank God for the privilege and blessing I have received to be a part of the giving. I really think now of how good God is to me, and how can I better use His blessing to be a blessing to others?

“And I will make of thee a great nation, and I will bless thee, and make thy name great; and thou shalt be a blessing:” Genesis 12:2.