After the first month of studies at Elim Heights Youth Camp was over, the EMC students were divided and placed in homes of different families while their course continued at AUC Headquarters in Schofields. 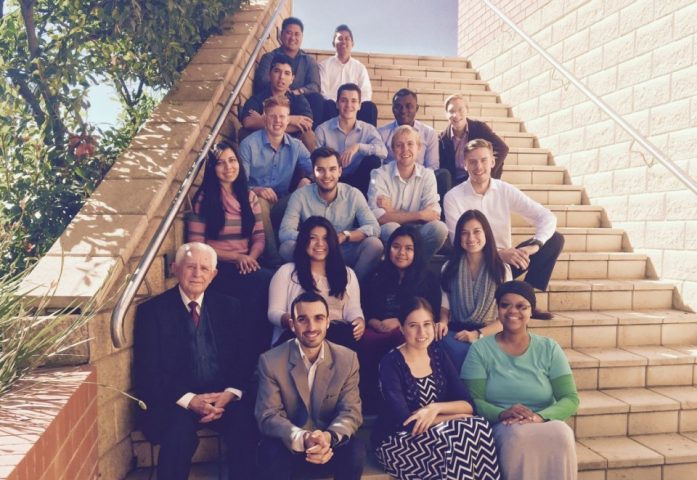 During the months of March and April, the students’ schedule included classes in the mornings by different teachers; Brethren Peter Lausevic, Paul Chapman, A C Sas and Rolly Dumaguit. The students also went through the “Depression Recovery Program” with Bro. Domenic Polistina and had a special Sabbath School Seminar run by Br Sam Batger.

During the weekends the students were split up and assigned to visit different churches, groups and individual homes where they presented Bible studies. Those who received visits truly enjoyed the fellowship.

Each day, the students had breakfast and evening meals at the homes where they were placed. Lunch was provided at Schofields by Sisters Rosemary Voncina, Mira Ilic, Amy Gules and Nadine Polistina, with the help of Sisters Tanya Ah-ching, Lidia Voncina, Veronica Hake, Susan Lausevic and Lizy Thiel. The students were in charge of making fresh salad each day to complement the dishes cooked by the sisters. 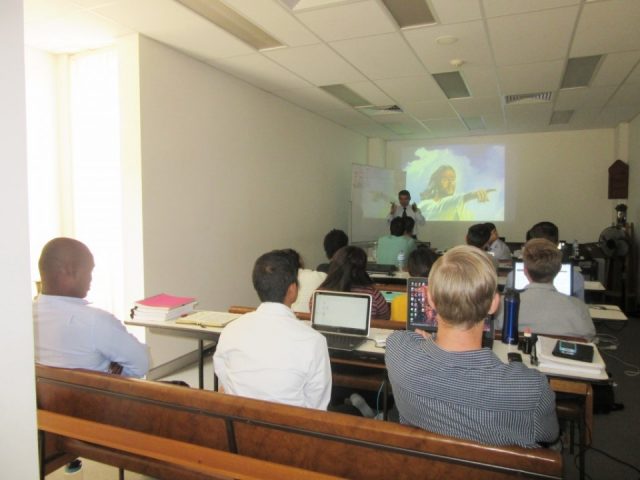 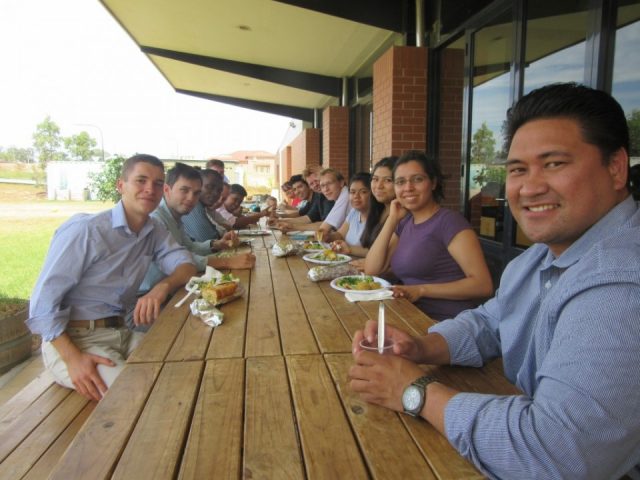 After lunch the students spent the afternoons doing canvassing work. Br Rolly took the class on how to be successful in the canvassing work, and then they put the theory into practice by spending some time doing door-to-door canvassing. During these two months, the students combined sold a total of 710 books which brought in an income of $4425.30. 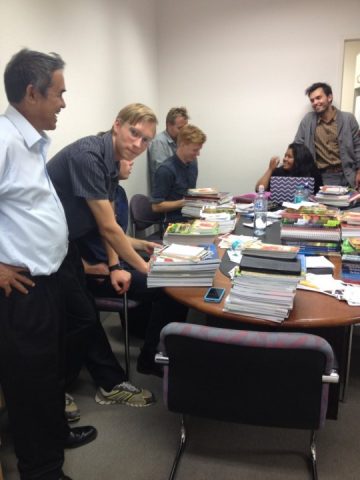 While doing the canvassing work, the students were also able to personally invite people to attend the cooking classes held during April; they also made many contacts who are now receiving Bible studies. 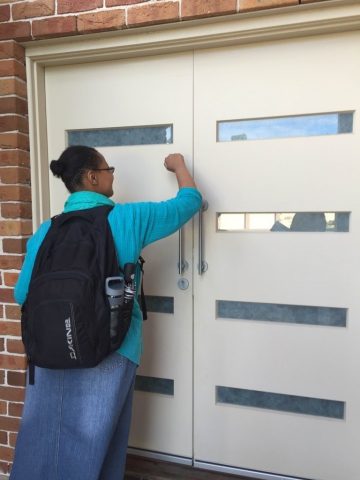 We thank the Lord for helping each student in their missionary work, and may the souls that have been reached surrender their lives fully to Him.

On the day before the last day of our canvassing work, my teammate Jade and I went out to canvas, praying that the Lord would bless us, especially since we did not have many results from the day before.

As we began to knock on the doors of the residents on Hillcrest Road, it was quite discouraging at the beginning, without answers until we met a little boy riding his bicycle in a “no through road” across Hillcrest.

When we met him, Jade was a few steps ahead, when he asked me, “What are you doing?” as he saw me holding the books. I answered politely without trying to get something from him, “Well, we are asking for donations in the community in favour of the Elim Health Centre, and as an appreciation for donations we offer a book that will benefit them in return.” Then he smiled and answered, “Oh, nice,” as he slowly continued to ride his bicycle.

As I kept going and knocked on the first door of that street, I did not see him for a while, and suddenly I saw him also knocking on the door of the third house away from me. They opened to him and I heard him saying to the lady who opened to him, “Hey, these guys over there have books to sell; they will come to you just now.” I was so surprised when I heard that, and he seemed to be well known by her.

I kept knocking on the door and nobody answered, and as I was going to the next door he came to me and said, “The man will not hear you because he is in the backyard.” When I looked, he was there. I went and had a chat for a while with the man. He was not really able to buy anything and said his son is a nutritionist. So we finished, and as I went out the little boy was standing right in front, and I approached the next house and he smiled and said, “This is my house; come in.”

He went in first and talked to his father. Before I even started talking, the father asked me to tell him what this was all about. As I finished, he kindly gave his donation and mentioned at the end that he is a Christian. I presented to him a few little books of stories for children and said, “I would like you to have these books for your son. I really appreciated his enthusiasm and his kindness.” The little boy was really happy, and he promised that he will read them. I was happy too.

And as I went out I found my teammate, Jade, who was sharing the same joy as me; he told me that the lady on whose door the little boy had knocked was really interested in having one of the cookbooks that we were advertising. She actually bought one.

The little boy was not an angel surely, but we could witness how God used him to help us in reaching the hearts of those people.

The greatest joy we experienced was from the fact that we were able to leave a book that contained the present truth in each of these homes that were opened to us. 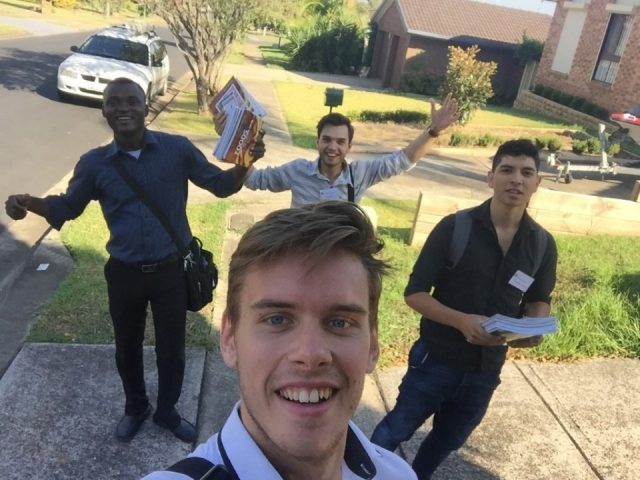 Above: Herold, Jade, Benji and myself canvassing out in the mission field!

One of the most interesting experiences I had during the four weeks of canvassing started when I met a lady at a door and began presenting some health books. From the start, she showed interest in the cooking books as well as Plants that Heal and Foods that Heal. During the conversation, I noticed in the background her young daughter was home as well as what I believe was the woman’s father (or father-in-law). After discussing the suggested donation for each book, she realised that she did not have enough cash for the books, so I left her with an invitation to the upcoming cooking classes.

After leaving this lady’s house, I continued my canvassing at the house next door. After knocking twice and waiting a reasonable time, I realised that nobody was home and decided to continue on to the next house. As I was walking out of the driveway and towards the next house, I heard a man’s voice from inside the first lady’s house saying loudly, “Where did he go!?” I continued walking until I heard the voice behind me say, “Hey!”, in a rough tone. I quickly decided to trust God and turned around to see an older man who had come from the first house. As I walked towards him, he asked about the price of the books and showed interest in purchasing one if I would agree to a bargain. I spent a bit of time negotiating before he went inside. Then I heard the lady tell him which book she thought looked most interesting. Shortly after, he came out with enough money for two books, and I was glad to leave him with the books Plants that Heal and Foods that Heal. After leaving the house for the second time, I immediately thanked God for turning what was a strange situation into an opportunity to share some practical health books.

It all happened on a sunny Thursday afternoon. My partner, Cameron, was having tremendous success selling books left and right, one after the other. We prayed at the beginning of our adventure, and the bright sunshine reflected the rays of blessings that God poured on us. I sold one or two books, but nowhere near the seven or eight sales Cameron was racking up. We prayed for sales, but we also wanted to reach people for Bible studies and talk to them about Christ. And I was desperately trying to get either. And finally I got to a door of a shanty-looking house, and some kids answered the door to bring their mom to meet me. She was on the phone, and by my estimation, not at all excited to talk to a stranger at the door. I tried to canvass, but she was distracted on the phone, talking to what appeared to be some inspector of sorts. It did not sound good. It sounded like she had to pay more money that she didn’t want to pay. Through my staggered attempt at canvassing, she told me to come again in half an hour. I did not think much of it, but after meeting with Cameron, thanking God in prayer once again and pleading with him for success, I had a burning desire to meet her again after half an hour. I was praying in my mind as I was marching back to her house and to her door. Finally, I knocked. The sweetest Samoan lady opened the door, the very same lady, and explained what had her attention earlier and why she couldn’t speak to me. She purchased a health book, and we got to talk about why I’m in Australia, how I’m studying in Bible college, and how we want to spread health in the community, both physical and spiritual. She shared a little of her life story along with her father, and they both let me know that anytime I’m around, I could come in for a chat, to say hi, and they would most definitely like a Bible study. God answered my prayer in what at first appeared like something else entirely. He truly works in marvelous and mysterious ways, and I thank Him for it.