The theme for this camp was ‘Making Eternity a Priority’, vitally important to all of us in these last days. We looked forward to the presentations on ‘The King is coming’, ‘What are you doing with your life?’, ‘A life-changing experience’, ‘Redirecting your life’, ‘Preparing for Heaven’, ‘Opening the heart to Jesus’, and ‘Reprioritising’. 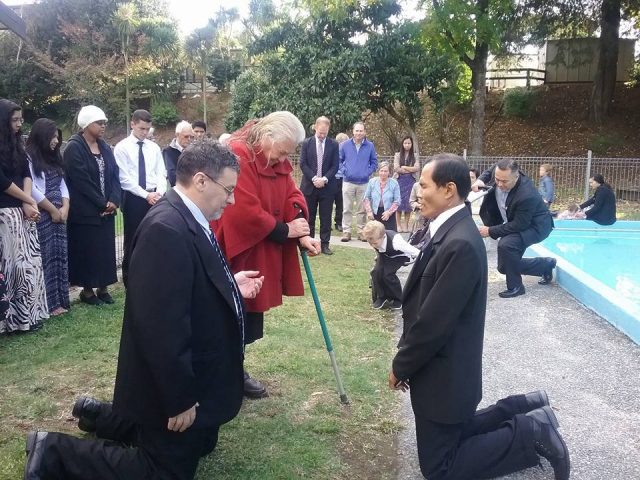 This was a busy day – my husband William and I set off for the Avondale Produce Market with Sis Richel Pedrosa at the bright hour of 7.30am, armed with a huge list. We visited many interesting stalls, where we tasted and conferred on the best vegetables and fruits, not to mention freshly-made tofu! The rain descended but didn’t deter the volume of people trundling through with their bags and trollies. Many trips later to the vehicle we headed back to the New Lynn Church. Later in the evening we picked up Bro Paul Chapman, then later Jared and Angellicar (Gee-ann) and their four-year-old son Stephen Kyle from Auckland Airport. Kyle found a special friend, William, who tried rocking the jet-lagged little boy to sleep, to no avail…

Off to camp. Our motor-home became the camp trailer, with every available inch taken up with camp produce. William and I arrived at 3pm; the others soon followed. Epworth Camp is in beautiful surrounds; the grounds border on the headwaters of Lake Karapiro, with huge old oak trees and a walnut, displaying their autumn colours. Lake Karapiro was formed in 1947 by damming the Waikato River to store water for the Karapiro hydroelectric power station. The lake is regarded as one of New Zealand’s best rowing venues, where New Zealand Olympic rowers train. The area is a wealthy dairy farming and horse stud district. Nearby Mt Maungatautari (797m) is covered in dense native bush and is a popular view point. 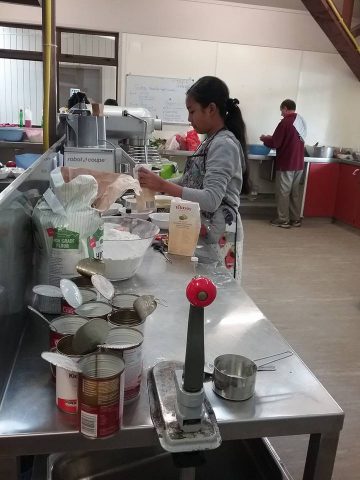 The camp is well set up with many rooms, family lodges, ablution blocks and a well-ordered kitchen with huge walk-in chiller and a massive mixing machine, which was put to good use later! Lots of organization followed: loading the chiller, stocking the pantry and sorting out a late dinner.

This day was set aside for the NZ Field Delegation (AGM) Meeting; so others arrived, and those who were not needed there were consigned to cooking duties! Nonetheless Richel and I were up in the kitchen by 5.30am, followed by William and Jared, to set up breakfast. Jared and Gee-ann were mystified and delighted with all the intriguing flavors of NZ fruit – feijoas, ‘kiwis’, even dried blueberries–and enjoyed the new season apples and pears! Brother Paul Chapman was of much help during the delegation meeting – a very long day, finishing for the attendees at 6pm. The day flew, as we also needed to make a run to Cambridge for a simcard for Gee-ann, more groceries, and hats/gloves for the visitors as temperatures were decidedly colder than the Philippines.

After a delicious tofu stir fried lunch and the regular worship held by Brother Arnaldo Pedrosa at 6:00pm, a couple of enjoyable hours were spent making ‘sausage rolls’ (over 300) to be chilled and cooked as needed. Many hands made light work!

Wednesday was set aside for the field board meeting, although it didn’t commence until 12:00 noon and finished just after 3:00pm, with dates and events set for the coming year. At 7:00pm Brother Pedrosa spoke on Matthew 7:13 – do we want to walk on the broad way (‘all roads lead to Rome’) or the strait, narrow way. The hall for meetings was huge; it was cold and echoed, so a decision was made to hold the following meetings in the smaller room adjacent to the kitchen. That night was another late one, making spring rolls – again, many hands were available to help, all under the watchful eye of Sister Richel. Many unique shapes and sizes of rolls!

Sister Winsome Latimer took the morning worship, entitled ‘Eternity and Life’. Brother Chapman spoke on ‘The Latter Rain’ with ‘Ten Times the Power’. “You are getting the coming of the Lord too far off. I saw the latter rain was coming as suddenly as the midnight cry, and with ten times the power.” Spalding & Magan Collection, p. 4:3.

At 7:00pm two cars left to pick up five students from Elim Missionary College, who had flown in to Auckland Airport – lots of laughs in our car, getting to know Guerlyne, Wendy and Lily. Bro Arnaldo and Sister Richel had picked up Serban and Roxanne. By 12:30am we were finally back at camp with tired and cold visitors, but after smelling hot soup and herb bread they decided food was the first priority! Unfortunately, they had not been able to bring bedding, and their first night in NZ was a little chilly as the heaters in the room switched off on the hour…brings to mind Eccesiastes 4:11 “Again, if two lie together, then they have heat: but how can one be warm alone?”! This was sorted out the next day!

At 9:15am Bro Serban Ionita took the message on ‘What is the glory of the Lord?’– discussing what is the glory (His goodness/character), where can we find the glory, and what do we need to see? (Jesus who gave His all on the cross of Calvary).

Brother Jared (Philippines) led morning worship and emphasised if we want to hasten the coming of our Lord, we will make eternity our priority. ‘If we would be saints above, let us be saints below.’ We need to give ourselves to God and be emptied of self.

The Divine Service was led by Brother Paul Chapman with 2 Corinthians 2:14 in mind – Steps to Christ, p. 68: “Now thanks be unto God, which always causes us to triumph in Christ, and maketh manifest the savour of His knowledge by us in every place.” Brother Chapman discussed in view of eternity, what should we be doing today? What is this savour? We heard from Steps to Christ, p. 58: “In the matchless gift of His Son, God has encircled the whole world with an atmosphere of grace as real as the air which circulates around the globe.” Jesus was the fulfilment of this sweet smelling savour (Ephesians 5:2) God now uses His people to manifest that sweet savour. Like it or not, we have an influence on the person next to us for good or for evil – and the question was, are we imparting to others a sweet savour of Christ? This was most thought-provoking and sobering. 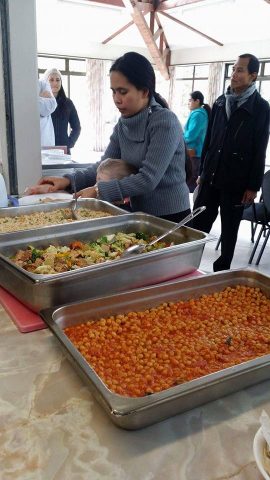 A delicious lunch was shared by all, including visitors for the day. Sister Richel had throughout this camp put much effort into putting at least 50% raw food on the tables – we were blessed to have such healthful food, all of which was obviously enjoyed by all. As explained above, the kitchen boasted a huge mixer which was put to good use, turning out huge amounts of herb pull-apart bread, fruit braids and loaves (William), cinnamon rolls (Adelaide) and a giant banana cake (Corin). Well done, all!

Following lunch, we all walked down to the pool, where we were privileged to witness Brother Eric Wilson make his profession of faith, and was baptised by Brother Pedrosa. Sister Jessie Paddison also wished to be re-baptised, and it was a wonderful occasion, seeing these two dear people braving the cool temperatures to commit themselves to our Lord. 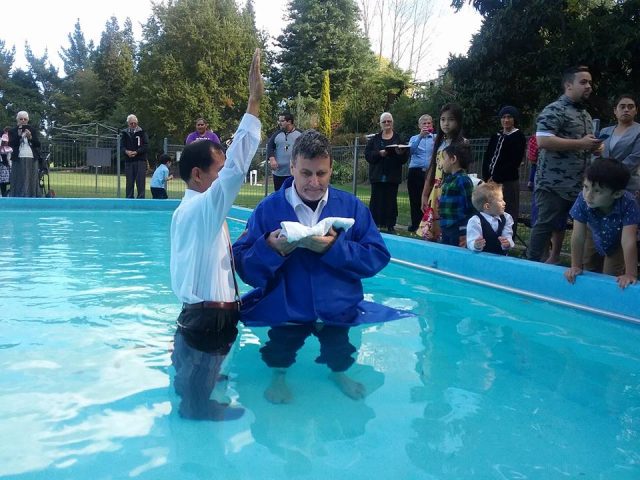 The Young People’s Meeting was held, led again by our friends from Elim Missionary College, with a fun time matching up biblical names; then a slideshow where we saw many interesting and touching pictures of a health mission they had been involved in, in Africa. Sister Corin organised and led a baby photo identifying ‘competition’ – many lovely old photographs were shown.

The day finished with a time of sharing talents – in song and poetry, with an international theme; many ethnic groups were represented. Over 50 people enjoyed this wonderful Sabbath, and it was great to catch up with old friends.

Brother Arnaldo Pedrosa led worship in the morning, opening with a story on Jonathan Edwards, the famous revival preacher, and the heritage he left to his 1000 descendants. He discussed our heritage (Acts 7: 2-5 – Abraham had no heritage on earth; Hebrews 11: 15-16 – we too desire a better country). We must dwell as pilgrims and strangers here if we would gain “‘a better country, that is, an heavenly.’ Patriarchs and Prophets, p. 170. ‘Christ communicates the current of spiritual strength to every believer. So long as the soul is united to Christ, there is no danger that it will wither or decay.’” The Desire of Ages, p. 676. God has our names in the books of heaven, engraved on His hands.

We must take hold of that long line of victorious examples in God’s word and throughout the ages and claim that wonderful promise: “Beloved, now are we the sons of God, and it doth not yet appear what we shall be, but we know that, when He shall appear, we shall be like Him, for we shall see Him as He is. And every man that hath this hope in Him purifieth himself, even as He is pure.” 1 John 3:2, 3.

On this wonderful hope camp was closed. Many thanks to all who made this week possible – the speakers, our friends from America, those who looked after the children, those who contributed around the camp in various ways and in the kitchen, with donations, but most of all with their presence and prayers.